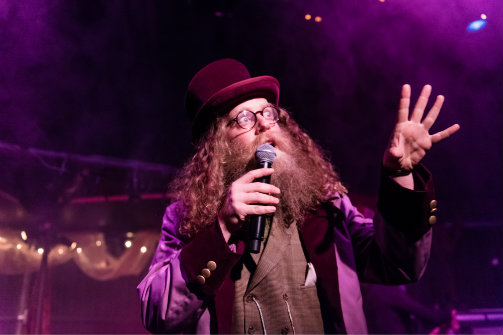 BOTTOM LINE: Old Stock: A Refugee Love Story is a lively Klezmer concert with a less successful play in between songs.

Old Stock's subtitle, A Refugee Love Story, is a bit misleading. Don't go in expecting a sweeping love story or rom-com style romance. The relationship at the center of this concert-play hybrid is rooted mostly in practicality. Given that Hannah Moscovitch's script is based on a true story, this is probably realistic. Anyway, the real reason to see it is the Klezmer music.

The refugees in this "love story" are Chaim (Chris Weatherstone) and Chaya (Mary Fay Coady), Romanian Jews looking for a new life in Canada in 1908. Chaya is still grieving her first husband and Chaim is suffering from the loss of his entire family. While I've seen other works of art about Jewish refugees, this particular history, of Romanian Jews in Canada, is one I'm not as familiar with. It could be fleshed out more—other than their tragic backstories, we don't get to know them well, which makes it hard to root for them, especially since Chaya doesn't like Chaim much. Then again, they really are secondary to Ben Caplan, who plays the narrator, The Wanderer.

Caplan, a true showman, has a dynamic voice and is entertaining to watch. Weatherstone and Coady also make up part of the band, rounded out by Graham Scott on keyboard and accordion and Jamie Kronick on percussion. It's unfortunate that the book and song scenes aren't more balanced, but when they all play together, the show really comes alive.

Old Stock is more risqué than one might expect from a Klezmer musical (at least, if you're not that familiar with the genre). There is one section about euphemisms for sex that goes on too long, becoming less and less funny (this coming from someone who enjoys a good sex euphemism), but apart from that, it's refreshing to see a show dealing with religion that is so upfront about sex.

There are other clever touches, like Louisa Adamson and Christian Barry's set, a shipping container that opens up to reveal the band, and closes back up at the end of the show. The music ensures that while they're gone from our sight, they're not completely forgotten, just like the people they are trying to honor.