By Jaki McCarrick; Directed by Colleen Clinton and Lily Dorment
Produced by The Pond Theatre Company

Off Off Broadway, Play
Runs through 9.23.18
Walkerspace, 46 Walker Street 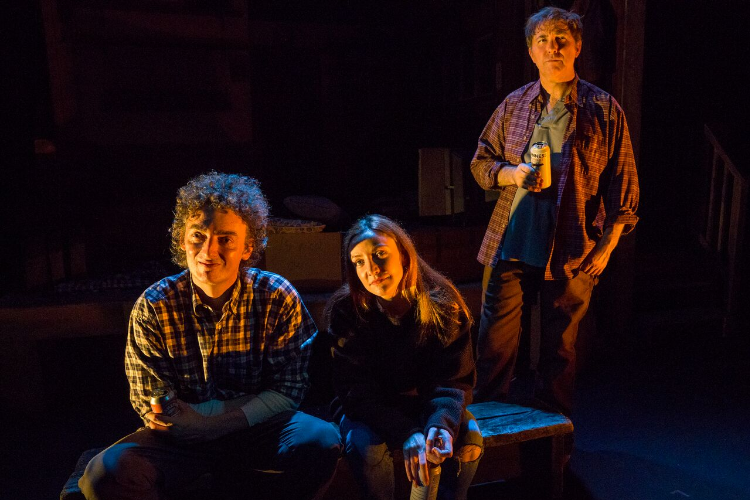 Playwright Jaki McCarrick uses an E. E. Cummings poem as the dedication for the script of The Naturalists: "Love is the every only god." This sentiment is explored with warmth and humor in this world premiere production. In the first ten minutes, though, one could be forgiven for expecting The Naturalists to become "Cain and Abel play Juno and the Paycock": we're first introduced to two brothers in conflict, living on an isolated farm, picking at one another about their failing ambitions and empty love lives. They've laid their battle lines: forty-something Francis (Jon Keating) waxes poetic about plants and demands a clean carpet, while the younger Billy (Tim Ruddy) is the gruff "animal man" with a beer in his hand and his feet on the coffee table.

The brothers have been stuck in a rut for over a decade, living in a Caravan ("Mobile home," corrects Francis) until they're able to repair their (literal and figurative) house on a hill. The task has dragged on for eighteen years, breeding contempt between the men even as they both reach toward the same ambitions—both, perhaps, hoping to lure back a mother who abandoned them both in their hour of greatest need. To help diffuse the tension and free up time to repair the house and run the farm, Francis hires Josie (Sarah Street), a fiery, well-traveled neighborhood woman, to do their light cleaning. Sophie has dreams of dance inspired by Isadora Duncan, and a driving need to be out of doors. The brothers are a bit confused as to why she would spend so much time in their stuffy little house, which Francis compares to a prison: "A room with no air, no natural light and the smell of shite for company."

Josie, quite simply, lets the sun in—and as she is gradually accepted into the brothers' little improvised family, we see that this play may not end in tragedy after all. Despite being a "Troubles play," the violent conflict around the status of Northern Ireland providing a backdrop (specifically for this story, the aftermath of the Narrow Water massacre or the Warrenpoint ambush), The Naturalists is about being open-minded and diligent in pursuit of love and redemption, as one must be as a steward of their environment. It's also very funny.

The soundscape, created by Christopher Ross-Ewart, sets the tone: non-diegetic sound and musical scene transitions of Tom Waits, "When Josie Comes Home" by Steely Dan, and the like provide self-conscious commentary just right for the play. Self-deprecating dark humor abounds (for instance, a comment about veganism made at just the right moment). The brothers' conflict over whether boots should be worn in the house could have come out of a silent comedy. A slapstick sequence where the men carry a heavy load ends with a splash. Francis's friend John-Joe, pot-bellied in a black wife-beater (Michael Mellamphy), provides the ideal skeezy straight man presence to really set off the family's chemistry and humor, amping up the action in the second act.

Chika Shimizu's set rightly focuses on the brothers' dingy home, while the beautiful hills beyond are only sketched in for us by Francis's poetic explanations of natural concepts, Josie's wide-eyed amazement, Billy's quiet satisfaction, and John-Joe's proprietary evaluations. Rarely is nature's power to heal and draw people together so well-represented onstage, and with such humor—a real triumph for the cast, writer, and co-directors Lily Dorment and Colleen Clinton. The Naturalists is sure to remind you of something you'd forgotten about selfless love for folks around you, and the planet.

(The Naturalists plays at Walkerspace, 46 Walker Street, through September 23, 2018. The running time is 2 hours 15 minutes, with an intermission. Performances are Tuesdays through Saturdays at 7:30 and Sundays at 3, with an additional performance at 2 on Saturday, September 22. Tickets are $45 and are available at thepondtheatre.org or by calling 212-279-4200.)