By the Q Brothers Collective; Directed by Michelle Tattenbaum

Off Off Broadway, Play
Runs through 4.28.18
The Flea Theater, 20 Thomas Street 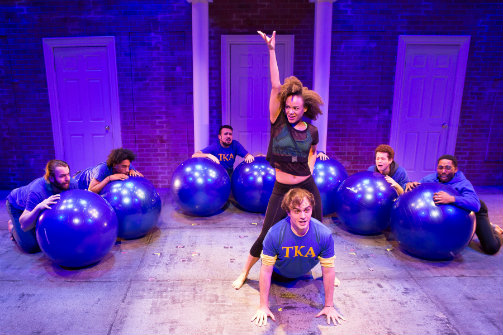 ms. estrada is the engrossing story of Elizabeth Estrada (Malena Pennycook), her friends, and their attempts to reform the habits of their slovenly male counterparts, who are members of the campus “Greek” system. Of course, the name "Liz" Estrada is a riff on the ancient Greek comedy Lysistrata by Aristophanes (who shows up in another character's name). This wonderful show is brought to us by the Q Brothers Collective, who specialize in remarkable hip-hop adaptations of Shakespeare (Othello: The Remix) and other classic works. As we learn in their raunchy curtain speech, the mostly straight, mostly white Q Brothers are obviously sensitive to the situation of women at this historical moment, something made clear by this female-driven production, directed by Michelle Tattenbaum and dominated by DJ Marguerite Frarey, who spins from a platform high above the stage.

At Acropolis University, Liz is excited to study feminist literature with Ms. Spencer (Jenna Krasowski). The class is almost entirely women, plus the earnest (and very male) Brian (Jonathon Ryan), who professes to take women seriously, but has not figured out how to put this into practice. The rest of the campus is overrun with the wild, intoxicated men of TKA (Tappa Kegga Alpha), who are busy preparing for the annual Greek games, started by prominent and wealthy alumnus Harry Stefani (Michael Ortiz) and supported by Dean Dean Jaffe (Ben Schrager)—yes, his first name is Dean. This man-gathering gives Liz the chance to discuss with her roommates Cali (Madeline Mahoney), Marina (Pearl Shin), and Limpita (Caturah Brown) how their boyfriends treat them. Surprise—the situation is not good. Spurred on by Ms. Spencer, who advises her that in order to fight the Patriarchy, she needs to "kick it in the dick," Liz and her friends start the “Ring Ding Dong” movement, which advocates that college women no longer have sex with men until the Greek Games are abolished.

Within the 100% rhyming text are some powerful songs, with dozens of performers whirling around to Rockafella's choreography. Everything from the women's yearning for justice to the men's partying (and puking in a bucket) is precise and keeps the show's action moving. There are also Liz's spoken-word manifestos, satirical news reports, and more, all brought to us in natural-sounding speech (Aristophanes used trochaic tetrameter in his plays; I say whatever works).  Michelle Tattenbaum's direction pushes this large ensemble to stand up for what's right and to never surrender. Malena Pennycock excels as Liz, who follows the example of her feminist forebears and provides a sterling example for the ladies on campus who, thanks to her, question reality and find new ways to assert themselves. Jonathon Ryan excellently evokes Brian's tremendous growth as he learns to listen to the women around him. And as Dean Dean Jaffe, Ben Schrager pulls off a great (and unexpected) transformation as well. John McDermott's multi-level set allows for a lot of things to be happening at once, and also hints at the Acropolis setting. And Robin I. Shane's costumes will bring you back to college days.

ms. estrada arrived at the right time. Our culture is rapidly mobilizing to oppose abusive men. While the women in Lysistrata used abstinence to force an end to their own wars, today we oppose the ever-present war on women. The relentless and uncompromising hip-hop text and choreography of ms. estrada will no doubt keep audiences engaged. Certainly, it's a show that should appeal to any open-minded theatergoer.

(ms. estrada plays at The Flea Theater, 20 Thomas Street, through April 28, 2018. Running time is 90 minutes with no intermission. Performances are Mondays, and Wednesdays through Saturdays at 7; Sundays at 3. Tickets start at $17 (first-come, first-serve), but all remaining tickets are $37; $102 premium tickets are also available. For tickets and more information call 212-226-0051 or visit theflea.org.)