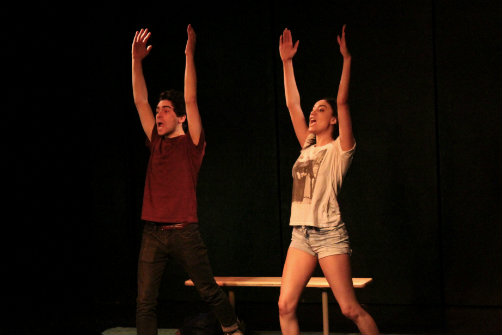 BOTTOM LINE: Focusing on the folks in the bleachers, Little League offers serious questions while delivering humor from a top-notch cast.

Rather than focusing on the children playing baseball, Jack Spagnola's Little League turns its gaze to the individuals in the bleachers. While watching the kids play, they are simultaneously contemplating the future, remembering the past, receiving advice, and debating the way they live their lives. Technology plays a role in each of their daily choices, but how does that affect the bonds built between people? How do we know if what we want is really the best choice for our life? While this show asks some tough but familiar questions, Spagnola, with the help of director Noam Shapiro and a fantastic cast, poses them in a new way to inspire mindfulness while not shirking on the entertainment.

Little League centers around two pairs of people. Moms Phoebe (Barrie Kealoha) and Marsha (Kea Trevett) both have kids on the team—one has a song who is the worst (though she would never admit it), and the other has a kid who is good at absolutely everything. They are clearly in these bleachers constantly and touch base on a multitude of parental dilemmas, like the death of a pet. Then there's Sam (Bartley Booz) and Darya (Leslie Class). Dating since middle school, the pair will soon be heading to colleges far apart from each other, and neither wants the inevitable breakup to occur. Spagnola also mixes up the pairs: Sam runs into Marsha on the field at night, and later, Darya (whose brother is on the team) bonds with Phoebe over gaining Instagram followers.

Despite the festival setting, which doesn't allow for much of a set, Shapiro's work comes across wonderfully in the small theatre. He manages to find variety and innovation directing the actors around a single bench on stage. Indeed, the best occur when the actors express their emotions non-verbally, whether it's Sam uncertainly reaching for Darya's hand, only to give her a thumb-up at the last second, or Marsha awkwardly sit-standing as she tries to decide if she should stay and talk with Sam.

And Shapiro has an all-star team to work with. Bartley Booz's awkward humor makes for a Sam who seems a bit out of place, but still worth rooting for, like someone on The Big Bang Theory. Leslie Class is beautiful and ridiculously cool, but also extremely relatable—think the heroine of a Disney Channel show. Barrie Kealoha is a natural for a morning talk show—her facial expressions would play off amazingly well with Kathie Lee Gifford. And then there's Kea Trevett, the ace of this squad. Mark my words, we will see Trevett as an SNL regular in a few years.

Not every joke is a home run, and there are a few foul balls, but clearly the crowd is overjoyed with how they play the game. The content of Little League is insightful, with serious questions we can reflect on, yet somehow Spagnola manages to maintain a lighthearted air. I wouldn't mind the addition of a few more scenes, to turn this into a full-length play with intermission. Heck, I'd even want to see it a second time myself. I'll be a loyal fan for this team.