By Alexis Roblan and Alisa Zhulina; Directed by Julia Sears and Jillian Carucci
Part of Exquisite Corpse Company's This Is A Distraction Festival 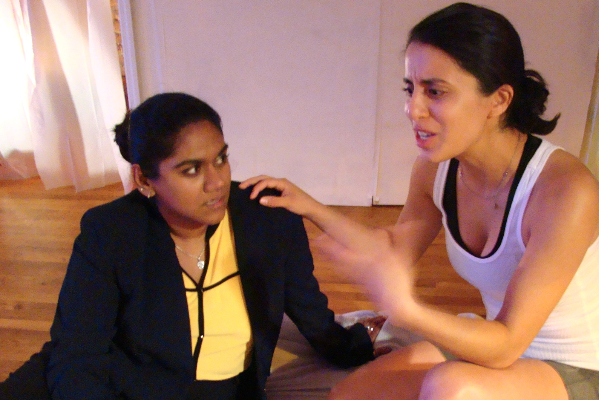 BOTTOM LINE: Two compelling new experimental works explore breaking out of isolation, and how characters may change themselves in the attempt.

Exquisite Corpse Company presents several weekends of new work in their This Is A Distraction festival. After Buffalo Buffalo and The Chechens, the second pair is Alexis Roblan’s Liliya, directed by Julia Sears, and Alisa Zhulina’s Killjoy, directed by Jillian Carucci. In keeping with the company’s aesthetic (the term "Exquisite Corpse" was used by Surrealists who collectively assembled words and images), the performance space has multiple levels, allowing for simultaneous action in and out of your field of vision.

Liliya is a surreal journey. In 2005, Lillian (Ana Mirabal) is studying abroad in Moscow. Although the place is inspiring and the language she's learning is beautiful, she feels sick and visits the American Hospital. Doctor Estrada (John-Paul Stewart), from Barcelona, suspects she has mononucleosis, but should still be tested for diphtheria. Doctor Vasneva (Kristin Condon), whose best attempt at the patient’s name is “LiIiya,” concludes she must be quarantined. Hospital conditions are somewhat frightening, yet it does seem odd that Estrada drinks the blood drawn from Liliya.

From there, we turn inward into dreams. Is Douglas (Trevor Eichhorn), Liliya’s last boyfriend from London, climbing through the hospital window to visit her? His references to “pollinating” suggest womanizing, but later he shows up with a bee’s antennae growing out of his head. As Vasneva and Estrada canoodle one evening, Douglas flies into their room dressed like a bat. Later, Douglas the bat (or “Batman”) and Estrada seek answers from a gigantic Ouija board. Eventually Liliya herself is a bat, and she time travels out of 2005 into the present. Some delightfully spooky, larger-than-life puppetry from the rest of the ensemble helps explain why the past is such a terrible burden for Liliya.

Liliya uses language in many evocative ways. Everyone seems to be a foreigner bemusedly observing their surroundings. Why the Russian hospital had to be so horrifying is not for us to know, but Liliya is to some degree based on playwright Alexis Roblan’s actual experience in quarantine. Characters speaking in accents and dialects achieve a hard-won honesty, not for the faint of heart: “I am an unbaptized child left to die in the forest by its whore mother.” Director Julia Sears brings much life out of the humans and other species who populate this world. Adriana Covone’s costumes (and puppet design, perhaps) make this fantasia all the more fabulous. Sonya Plenefisch’s sets fooled me with the clean hospital look, and then threw in an enormous, vertical Ouija wall. And I have much respect for how the ensemble transcended so many theatrical rules to bring this surprising story to life.

Killjoy is certainly its own kind of masterfully suspenseful play. It opens with the apparent interrogation of a Muslim woman wearing a hijab (Isuri Wijesundara) by two American soldiers, Jake (Tim Marriott) and Alex (Lee Collins). However, this is not a scenario where the soldiers are in control. On the contrary, the woman under the hijab is Nadia, a psychologist who is evaluating the soldiers, and this is a CIA training center deep in the Nevada desert, currently cut off from civilization by sandstorms and other undisclosed unrest. Nadia uses seduction as a weapon against Jake, who is placed on probation. When Nadia is alone with Alex, the other administrator, they admit to each other that they are both afraid of being assassinated. Nothing can convince Nadia or Alex that the other isn’t trying to kill them in any number of ways—they can’t even drink a champagne toast without fear of poisoning. The seemingly unresolvable tension is well played.

What is really going on in the world? Or perhaps worlds, as Alex concludes that a parallel world has collided (if not colluded) with ours, bringing a surplus of fake news and alternative facts. Leslie (Robyn Unger), another soldier under Nadia’s observation, believes the Rapture is coming soon. Times are strange when a New Testament apocalypse is just another semi-reasonable conspiracy theory. Nadia tries to bond with Leslie over their shared gender, but Leslie sees herself as just one of the guys. All four of these characters have flaws, including much self-doubt. But by the end of the story, only two of them are still alive.

Killjoy is a play that doesn’t need to have all the answers. It succeeds by asking us to confront our assumptions. Julia Sears's fight choreography proves to be just as important as the other elements of the piece. Perhaps the most aggressive in this bunch is also the smartest. Jillian Carucci’s direction makes all the mistrust, paranoia, and animosity quite enjoyable. Non-military folks can surely learn a lot from a few hours of high-stakes theater like this.

(Liliya and Killjoy play at The Parlour, 144 Fifth Avenue, Suite 2 through August 26, 2018. The running time for Liliya is 75 minutes with no intermission. The running time for Killjoy is 90 minutes with no intermission. Performances (of one or the other) are Thursdays through Saturdays at 6 and 8; Sundays at 3 and 7. Tickets are $20 per show, $35 for an evening of two shows, and are available at exquisitecorpsecompany.com.)