This show has closed. For more information visit cherryorchardfestival.org

By Anton Chekhov; Directed by Timofey Kulyabin
Produced by Russia's Theatre of Nations 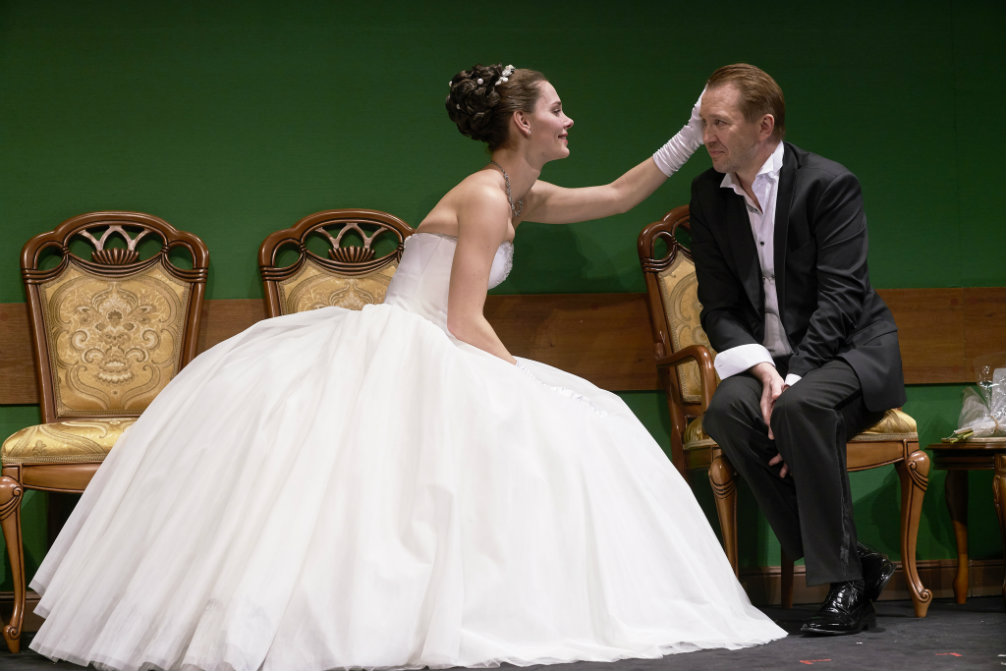 BOTTOM LINE: An epic modernization of Chekhov’s debut comedic melodrama by Russia’s Theatre of Nations, Ivanov is urgent, vibrant, and distinctly relatable for an American audience.

It’s a rare treat for the American stage to be graced by one of Russia's theatre powerhouses, Theatre of Nations. This summer, it seems like they’re aiming to spoil us, featuring not just one but two epic productions—Love and Fate at BAM, and an epic and electrified modernization of Ivanov at City Center. Baring all its teeth and soul, Ivanov stars the company's Artistic Director Evgeny Mironov in an outstanding performance, along with an ensemble of beloved international Russian superstars. The production is brought to life by the brilliant Timofey Kulyabin, Chief Director of yet another Russian hotbed of theatrical talent, Novosibirsk’s Red Torch Theatre. This gem has been transferred from its hit Moscow staging at the Cherry Orchard Festival, an annual celebration of the best from around the globe, now in its sixth year.

In Chekhov’s seminal debut play, we follow Nikolai Ivanov, a bored and disenchanted "government official" from a rural suburb, captured with soul-crushing complexity by Mironov. Despite holding an important government position, Ivanov is in perpetual debt to the Lebedevs, the richest family in town; he sees very little joy or purpose in life as he is beset with obligations, some financial, some external. Ivanov is out of money and his wife Sarah (Chulpan Khamatov, who owns the stage whenever she appears) is dying of cancer. She adores Ivanov, who does not return her affections.

Meanwhile, Uncle Matvei (a hilariously caustic Viktor Verzhibtsky) is fuming with boredom, and to amuse himself, confronts Ivanov at quite literally every corner of their small apartment. As for Ivanov’s inner afflictions, his biggest cross to bear is his guilt and embarrassment over a wasted life; at one time both ambitious and smitten, Ivanov is now way past his prime, mostly broke and completely out of love with Sarah. As the play progresses, Ivanov very, very reluctantly nudges himself towards a new romance with Lebedev’s youngest, Alexandra (captured with passion and pain by stage and film star Elizaveta Boyarskaya). Eventually, that leads Ivanov towards some soul searching, and Mironov levels the house with a soliloquy at the top of Act 2—Ivanov’s own "To be or not to be" moment.

This early suburban(ish) melodrama has all of the themes and nuances that became Chekhov’s signature elements later on, such as seeing comedy in misery, the insufferable tedium of everyday life, and characters seeking solace in the arms of reluctant or entirely unwilling lovers. Oh, and of course, death and celebrations. In a grand and sharp adaptation by Roman Dolzhansky, Theater of Nations' Ivanov is a modern, post-Soviet interpretation of a pre-Communist critique of suburbia, and the production is totally relatable for both Russian and American audiences.

Performed in Russian with English supertitles, Ivanov unfolds over three hours-plus. The gorgeous, meticulous sets by Oleg Golovko are grand masterpieces. The costumes, also by Golovko, had me looking twice, convinced my own mother and uncles had just entered the scene; they are on-point, inimitable, blissful touches of pure Soviet nostalgia. Denis Solntsev’s lighting looks don’t waste any opportunity to paint haunting stage pictures. But the greatest accomplishment is director Kulyabin’s robust reinvention of Ivanov in a refreshing modern style. A true testament to Chekhov’s timelessness and universality, the updated language feels natural and fits the cast organically. Kulyabin creates his own brand of naturalism, skewing the genre with moments of grand theatricality and magic realism. A man on the brink, Ivanov keeps getting closer and closer to the end of his rope, and Kulyabin mines every twist and turn, putting us in the passenger seat of this bittersweet emotional road trip.

As a bilingual Ukrainian-American immigrant, I felt reconnected with my own Soviet roots at Ivanov. Occasionally the projected English translation falls short as some antiquated, obtuse phrases are awkwardly interpreted. But these are only small missed opportunities, and if this production continues to tour, it stands to become a modern classic across both the English and the Russian speaking worlds.

(Ivanov played at City Center, 131 West 55th Street, June 14 through June 17, 2018. The running time was 3 hours and 10 minutes with one intermission. For more information visit cherryorchardfestival.org.)

Ivanov is by Anton Chekov. Directed by Timofey Kulyabin. Set and Costume Design is by Oleg Golovko. Lighting Design is by Denis Solntsev. Dramatic Adaptation is by Roman Dolzhansky. Stage Managers are Anastasia Galitsina and Evgenia Antonyuk.