Book and Lyrics by Alex Koceja; Music by Michael Uselmann; Directed by James Will McBride

Off Broadway, Musical
Runs through 9.2.18
The Players Theatre, 115 Macdougal Street 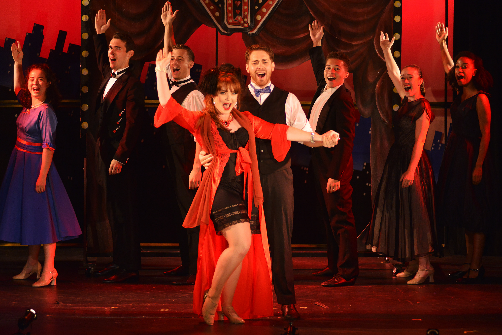 BOTTOM LINE: A team of thieves bands together to steal a forty million dollar necklace from an opera star during her show's opening night on Broadway, and are met with mishaps galore in this campy new musical.

Heist! begins with a heist that goes wrong, as Jack (Alec Irion) and his partner Chris (James Cella) are separated during a bank robbery. Unfortunately, as Jack, Betty (Chandler Converse), and Gil (Cordara Newson) get away, Chris is killed. Blaming himself, Jack goes on to live in despair, mourning the loss of his friend. We next catch up with Jack years later, doing small cons on the street. Gil finds him and convinces him to get back in the game with "One Last Job" (the name of a musical number, of course).

This time, the crew pulls in newbies Patricia (Blair Medina), a young woman who might be hard to trust, and Yevgeny (Chris Bober), a muscle-bound Russian. They are all in on stealing a forty million dollar necklace from famous opera singer Cynthia Stitskaya (Claire Leyden). Cynthia is currently in rehearsals for a Broadway show called Three Card Monte, so the team infiltrates the cast in order to swipe the necklace on opening night. Ultimately, it turns out there are some roadblocks in their way, so this heist turns out just as messy as the last one.

The Players Theatre has such a small stage it is hard to believe everyone fits, let alone being able to squeeze a full cast kick-line onto it. Not only does director James Will McBride manage that, but also the truly impressive feat of Act 2, during which the show within the show is performed. We see not only the backstage mischief, but also the onstage view, as a set piece rotates to show where we are. Honestly, I was impressed that not a single person on that tiny stage was injured during these fast-paced transitions; the cast uses the conceit to show off their acting chops, Noises Off-style.

Written by Alex Koceja (book and lyrics) and Michael Uselmann (music), Heist!'s most problematic aspect is its characters. Despite the talent of the cast, they fall flat; Jack, Chris, Cynthia, and rest are all caricatures. Still, I was pleasantly surprised with Heist! This show put me in the happiest mood that I had the pleasure of being in all week. The humor is exaggerated and a bit campy, but when Jack, asked how he feels, says "Huh? Oh, uh, Eiffel Tower-ible," Irion manages to make a ridiculous line land. There are also jokes sprinkled throughout for those who grew up as theatre nerds, from digs about dramaturgy to references to the stage union Actor’s Equity, including an entire number about contract violations called "Grounds for Dismissal." (Patricia Sabulis is surprisingly hilarious as a cross between Britney Spears and Kaley Cuoco with her singing and comedy skills.)

Heist! is ultimately a lot of fun. Its joviality, "Dad" jokes, and one or two killer singers make the whole production sweet and enjoyable. The problem is, I’m still wishing it had more umph, something to set it apart from all of the other cute musicals that give us inside jokes and catchy songs. Granted, I will give it credit for some great one-liners ("Get in, get paid, get out, get laid") and the fact that I will be singing "One Last Job" for the foreseeable future.

(Heist! plays at the Players Theatre, 115 Macdougal Street, through September 2, 2018. The running time is 2 hours with an intermission. Performances are Thursdays through Saturdays at 7 and Sundays at 2. Tickets are $32 - $52. For tickets and more information visit heistmusical.com.)