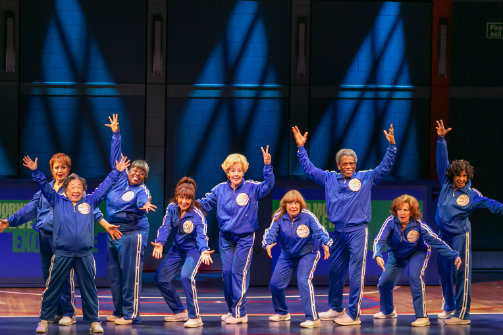 When you hear the phrase “hip hop,” you probably think of popular music in the genre, incredibly aggressive and awe-inspiring feats of dance athleticism, or maybe even its history as an underground movement that first developed in the Bronx. I’m willing to bet that the last thing that comes to mind is a group of mostly white sixty-year-olds breaking it down in front of an audience of two thousand spectators as part of a basketball halftime show. Well, that’s exactly the sort of entertainment in store with Bob Martin and Chad Beguelin’s new musical Half Time, now playing at the Paper Mill Playhouse.

So what brings together a group of delightful geriatrics wanting to bust a move, while avoiding busting a hip? It all comes down to one simple concept—dancing on the squad is a means to another end. At the show’s beginning, we are introduced to the New Jersey Cougars, a fierce and seemingly incredible basketball team known just as readily for their halftime performing dance squad. Leading the squad is Tara (Haven Burton), who displays her power-house voice numerous times throughout the show.

Half Time’s opening number, co-choreographed by director Jerry Mitchell and Nick Kenkel, immediately pumps out energy in a display of young, energetic women dancing their hearts out. In a brilliant display of juxtaposition, their youthful movement immediately segues into the introduction of the show’s real stars—the nine mature individuals we will soon grow to love and adore.

With each character given a line or two to introduce themselves, we learn that these older folks are auditioning for the Cougar dance squad’s upcoming special performance—a half time show danced entirely by individuals over the age of sixty. What the auditionees don't know is that this year, the dance combination will be hip hop. But of course, everyone eventually comes around in the name of breaking expectations around people their age.

Much like The Full Monty (another musical about everyday folks who perform in a genre one wouldn't expect), Half Time is structured in scenes that count down to the big show. Each major character has their own opportunity to reveal, generally in a solo, what they hope to get from this performance. Bea (Lillias White) tells everyone she just wants to have fun, but in actuality she hopes to rekindle her relationship with her granddaughter Kendra (Nkeki Obi-Melekwe), a member of the Cougar dance squad. Then there’s Ron (André De Shields), a dapper gent who seemingly wants to get out more, but is really trying to get out of the emotional hole he’s been in after the death of his wife.

I would be remiss if I didn’t mention Joanne (Donna McKechnie), a former Broadway chorus girl who is using the squad to relive the glory days of her prolific dancing career. At the risk of being too on the nose, Half Time gives a nod to McKechnie's fans by including several music cues, bits of choreography, and even spoken lines that herald her most famous role as the original Cassie in A Chorus Line. Yet Half Time’s brightest star comes by way of Dorothy (Georgia Engel), a sweet and meek kindergarten teacher who, without giving anything away, turns out to know more about hip hop than anyone else.

While Half Time will have you grinning from ear to ear and laughing pretty hard throughout, it’s hard to ignore some of its flaws. At times Nell Benjamin’s lyrics feel amateur, with forced rhymes and obvious jokes. In fact, this seems to be a problem with the book at large—the humor in old people doing things “old people shouldn’t” is a crutch from start to finish. When a show force feeds the idea of re-thinking what people of a certain age are capable of (literally the second to last number is entitled “New Point of View”), why rely so heavily on making jokes out of people having difficulty, or even failing, in doing just that? Also, considering the involvement of Jerry Mitchell (Kinky Boots, Legally Blonde, and yes, The Full Monty), the choreography lacks creativity or any sense of originality outside of, you guessed it, older people attempting to take part. And if you are one who believes the adage that a musical's score can be evaluated based on whether you leave the theatre remembering the music, I’m sorry to say that Matthew Sklar failed in giving me a memorable experience from that standpoint.

Regardless of its flaws, there’s no doubt that you will find Half Time a great time, and will likely fall in love with each character for one reason or another. Your heart will be tugged, your gut will be busted, and maybe, just maybe, your perception of hip hop will be changed.