The Gunfighter Meets His Match 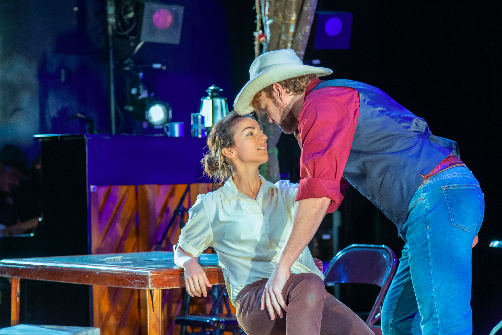 Kristen DiMercurio and Michael Hunsaker in The Gunfighter Meets His Match. Photo by VP Visuals.

BOTTOM LINE: One of the many offerings at this year's NYMF, The Gunfighter Meets His Match is a strongly sung Western that's still finding its footing.

Sometimes it’s the little things that catch the ear. In The Gunfighter Meets His Match, one of twelve fully staged productions at this year’s New York Musical Festival (NYMF), that little thing is the rousing strains of a trumpet, played vigorously by Kenny Warren. The whole five-piece band sounds crisp and lively, but it’s those buoyant trumpet lines that capture the joyously rootin’-tootin’ energy of the Wild West better than many other elements of this work-in-progress can.

The tale begins when a small-town sheriff (Craig Winberry) and Ms. June (Emily Vetsch), the proprietor of the local saloon, recount the ill-fated love story of an unnamed gunfighter (Michael Hunsaker) who falls for an unnamed newlywed, The Girl (Kristen DiMercurio), after saving her from an attempted rape. The affair ends abruptly, as does the storytelling, but the second act launches with the gunfighter’s return to town to warn his true love, now a rifle-toting ranch owner, that the would-be rapist (Ryan Lanning) has come back for vengeance.

The very busy Abby Payne, who wrote the book, lyrics, and score, leads the band from the piano, and also performs in a speaking and singing (and shooting) role as Ms. June’s ill-treated, keyboard-playing sister. Payne vocalizes powerfully throughout. As a songwriter, she injects an indie folk charm into much of her score, even if the lyrics often feel oddly detached from the characters who sing them (perhaps as a result of the score's concept album origins). I quite liked the anthemic groove of the finale “Like A Devil,” as well as the quiet restlessness of a soul-searching opening ballad for DiMercurio.

There’s a magnetic intensity to DiMercurio’s voice and presence. She sings with a Sara Bareilles-like ache that elevates and deepens the material. Hunsaker is a worthy match with his commanding cowboy vibrato and swagger. Boasting a lush and colorful voice, classical soprano Shara Radin stands out as a saloon entertainer. As Trudy, another saloon denizen, Joelle Lurie gets to belt thrillingly to the rafters, opposite the sweet-voiced Amanda Higgins as the gender-bending deputy sheriff Jimmy. Nolan Muña, playing The Girl’s unlucky husband, shows off his strong upper range, too.

It’s never entirely clear, though, whether Payne means to send up the genre or to make her own bona fide Western. Only Lanning, as the violent ruffian, embraces the broad melodrama with a wink—while he offers a lively, unrestrained performance, it seems like a mistake for the audience to have the most fun whenever the rapist is onstage. And while DiMercurio makes the most out of The Girl, especially in song, the script doesn’t offer the specificity or character development that would allow her story to serve as a feminist revision of the male-centric Western prototype.

Under the direction and choreography of Jeff Davis, the surprisingly large ensemble partakes in some spirited square dancing, and a balletic pair (Chelsea Retzloff and Brandon J. Jones), which represents the show’s central duo, gets some nice staging moments. Less effective is the bewildering full-cast shootout at the show’s climax. There’s also some nifty shadow play courtesy of Christina Watanabe's lighting, as well as echo effects from sound designer Kurt Bradley.

The talent involved—the lead duo, especially—would seem to beg for a more sophisticated version of this tale, one that relied less on saloon clichés and more on the sort of fiery, focused energy that’s in the room whenever DiMercurio sings. There’s something appealing and original about the show’s structure—a first act that’s framed as the retelling of an old town legend and a second act that sees the story continue in the present day—but the show doesn’t yet explore the gap between who these people really are and how they’re represented in the town’s mythology. That’s one possible way that this show could stretch itself as it develops further. My one request: don’t lose that rowdy, irrepressible trumpet.