By Ran Xia; Directed by Nicholas Orvis
Produced by The Arctic Group 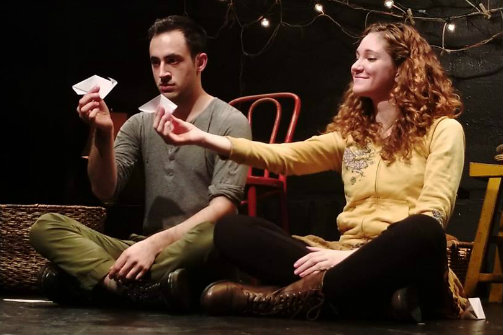 Editor's Note: As Asya notes, "because the show uses pre-recorded testimonies, why not include the voice of the author in the review?" So while it isn't common to combine an interview with a review, we thought we'd try it here, in the interest of experimenting with how a review might evoke a show's style and structure.

BOTTOM LINE: Ran Xia uses Greek mythology and anonymous testimonies from people all over the world in a mixed-media meditation on loss.

Imagine being stuck in a purgatory for lost objects, alongside a person with whom you are in love, but he is only into himself. And now imagine that you can’t speak to him first, and are bound to only repeat his words. So begins Echo, an experimental theater piece by Ran Xia inspired by the ancient Greek myth. The two characters on stage, Echo (Andrea Lopez) and Narcissus (Max Henry), are joined by an audio chorus of 25 people on the intricately woven soundtracks. Xia, a playwright and sound artist, met with me prior to the show to talk about her creative process.

I lost a wallet twice within a year as well as a lot of other stuff. I keep imagining my lost things are somewhere. Nothing is ever completely lost, right? I wanted to use that theme to connect with different people and started to reach out with a questionnaire: "What is your most treasured memory? What are you happy to lose?"

As the audience dives into the sound waves of anonymous testimonies, two characters look for Echo’s missing voice while sorting through the assortment of random objects.

I was reading a children’s book called Echo. It’s a journey of a harmonica and its different owners, how their lives are changed through a memory of an object. And I kept thinking about the objects that we owned and we lost. Sometimes they carry through a lot of different lives.

Memory stored in objects is an echo of different people’s lives. To this end, the set design consists of carefully assembled random objects, inviting the viewers to discover new things along with Echo and Narcissus. It’s amusing to imagine who owned a Barbie doll in a voluptuous pink dress, or find an Easter egg nodding to Xia’s previous show Pomegrenade, based on a different Greek myth. Much like pre-recorded testimonies, these visual objects create a strong magnetic field, evoking the viewer’s own personal memories.

Echo treats the objects that surround her as would a curious child who believes in magic. There is something playful and simultaneously ritualistic in the way Lopez tries to appropriate sound by swallowing bells or fanning air into her mouth. But those methods prove to be of no use. It takes another being, Narcissus, to break the spell. Yet he needs to lose something first in order to find and be found.

I initially thought this piece was going to be more about losing people, family members or friends. But as we started to work with my director and actors on the story of Echo and Narcissus, it becomes more and more about the development of the relationship, which we explore in the questionnaire as well: "What is your most terrible memory? What is something you’re most afraid to lose at the moment?"

Lopez and Henry act like a couple of teenagers needlessly hurting each other’s feelings. We could easily forget that we are watching two deities, if not for their names and the fact that Echo can only repeat what she hears. The latter restriction is no easy obstacle when it comes to crafting meaningful dramatic dialogue. Yet the duo, directed by Nicholas Orvis, powers through by using all the means that they have at their disposal: physical games, drawing, and origami. By wrestling the task of staging, Echo searches for alternative ways of “voicing” one’s agency and manifesting oneself.

The audio “ghosts” inhabiting this “no-place” give the characters their voices. Sometimes literally, when they retell the story of Echo and Narcissus. But mostly by creating a stream of experiences with flow together with the love story. You can tell how much care and genuine interest Xia puts into creating these "sound sculptures." The experiences of ordinary people get molded with music and ambient sound to create an intricate narrative tapestry all its own.

Audio experience, for me, has always been more intimate than performances that are limited to visual. The anonymity of that helps to make it as authentic as possible. We’ve all been through so much that we don’t really let others in. My favorite part is finding the similarities between experiences of different people, no matter their background and age. That feels magical to me.

Xia manages to convey this sense of magic in the ordinary. The flow of the spoken word and sound design feels like a tide that picks you up and pulls you into the depths of your own associations. But then comes silence, and you are on the shore again, where the dialogue of Echo and Narcissus feels like the sharp edges of broken shells. The meticulous design, emphasized by the thoughtful lighting by Ariella Axelbank, is inviting and incredibly beautiful. But it is the way that Echo sounds that makes it a one-of-a-kind theatrical treat.

(Echo played at The Tank, 312 West 36th Street, through April 21, 2018. Running time was 65 minutes, no intermission. Tickets were $15. For more information and recordings from the show visit thearcticgroup.org.)

The cast is Andrea Lopez and Max Henry.