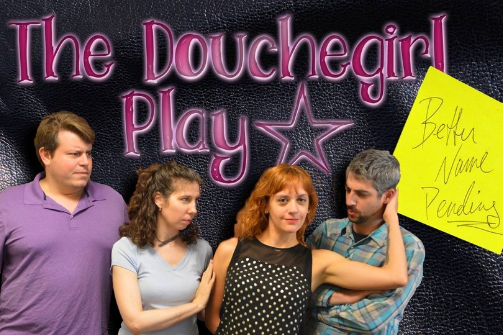 BOTTOM LINE: Long-lost Irma, who was presumed dead, is back in town with some choice words of love for best-friend Mariah, new husband Steven, and manly friend Lenny.

In a quiet suburban area live successful poet Mariah Porter (Heather Lee Rogers) and her huggable husband Steven (P. Case Aiken III). We first meet the Porters in a supermarket, where they bump into Irma (Morgan Zipf-Meister), Mariah’s high-school best friend who disappeared and was eventually declared dead so the town could hold a memorial service. Irma reveals that she left town to join The Rainbow Gathering (like Burning Man, but all the time), floated around the fun parts of the country for years, and only recently got back to find that her mother had died and her house must be sold. Steven offers to let Irma crash at their place, where she meets Steven’s workout buddy Lenny (Eric Hedlund), who spends a bit of time there. Irma regales Steven and Lenny with tales of the revolutionary scene, including Occupy Wall Street (“it was like Les Miserables”), gradually becoming very seductive.

Mariah’s resistance to new things and her writer’s block are clues to the mystery of her youthful friendship with Irma. Irma takes Lenny out for a wild night, which includes dancing on her own grave and digging up the tribute box that is buried therein. After drinking the whiskey found in the box, Irma confronts Mariah with the evidence: several of Mariah’s award-winning poems are written in Irma’s handwriting. Is it wrong to steal poems from someone who might be dead? And is it worse if you failed to notice the cry for help implicit in some of the verses?

From here, all the characters have the chance to make enormous changes in their lives. Will Mariah leave her staid marriage and bolt for San Francisco with Irma and a bus full of feminists and lesbians? Will Irma convince Mariah that they were really in love during high school? Will Steven stay friends with Lenny after his involvement with Irma and his revelation that he has certain outré fantasies? Where there is normal, there is subtext.

The writing and directing in The Douchegirl Play are a class apart. Yes, there are some semi-nude moments that writer-director Duncan Pflaster does so well. These are rounded out with Shakespearean references and show tune snippets that remind us about what is considered respectable human behavior. This all jives in interesting ways with Zipf-Meister’s fiery performance as Irma, the woman who tramples on respectability with the kinky line “My safe word is LOVE.” Rogers is a vulnerable Mariah, someone you could sympathize with if you cold get to know her. Aiken performs brilliantly as Steven, the guy who strains to put up with a conflicted wife and best friend. And as Lenny, Hedlund shows us the rash behavior we may expect from “real men” ("douchebags") and what really drives such posturing. Naturally, such a revelatory play is also transformed by the combined Fight/Intimacy Coordinator (the ever-present Emily Edwards).