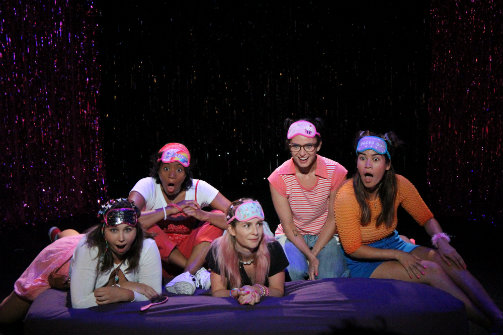 Rife with social drama, physical transformation, and emotional upheaval, preadolescence, well, kind of sucks. Yet there’s something undeniably endearing about this life stage: it’s a time when everything seems magnified, and we are as apt to recall our preteen selves with knowing smiles as with rueful cringes. Pulled from the real-life diaries of young girls in the late 1990s/early 2000s, Antigravity Performance Project’s Dear Diary LOL celebrates these formative years in all their awkward, hilarious glory.

As lead artist Francesca Montanile Lyons explains, the journals quoted in Dear Diary LOL are not, save Lyons’ own, those of the performers, but submissions from friends and acquaintances, identifiable only by their middle-school portraits in the program. From these verbatim accounts, the ensemble (Kelly Conrad, Alicia Crosby, Jessica M. Johnson, Jenna Strusowski, and Megan Thibodeaux) extracts a joint narrative, depicting their preteen muses’ hopes, fears, and contemplations. The result is as glittery, fast-paced, and outlandish as preadolescence itself, mimicking the age’s heightened emotions and wide-eyed discovery.

Most of the entries focus on interpersonal issues, as the girls dissect friend dramas and alternately cry and swoon over various crushes (most named Brian, all played to silent, clueless perfection by director Michael T. Williams). Oddly but no less fittingly, a crew of mustached, pink-suited construction workers oversees the action, invoking the same absurd guiding presence as Peanuts cartoons’  invisible, squawking adults. Amidst this fantastical backdrop, the characters fumble toward understanding as only young girls can: they write bad poetry, nurse rockstar fantasies, ponder the mysteries of sex and love, and sort through relationships with friends, family, society, and themselves.

Though Dear Diary LOL paints the preteen experience in broad, comic strokes, it also hints at the deeper concerns it encompasses. Several entries touch on anxiety, depression, or isolation; a girl’s casual recounting of her classmate’s racist comments reveals the microaggressions she has only begun to grasp. The age’s dance of confidence and shame surfaces as the girls mug or cringe at themselves in frame-like mirrors, finding its crux in one’s character’s dialogue with her “mean side” over whether she deserves affection. While such world events as 9/11 and the Iraq War take a backseat to the thrill of contact lenses and the agony of terrorists “ruining Halloween,” they also give the girls pause as they contemplate their mortality and place in the world. (In one darkly funny sequence, a girl imagines her death at the hands of the Washington, D.C. sniper, bleeding red ribbons as she begs her parents to care for her NanoPets in her absence).

Antigravity’s design team clothes the piece in intricate period detail: the girls wield Lisa Frank folders, swap spit and Bubble Tape with male peers, gossip on AOL Messenger, and learn sex tips from Cruel Intentions on VHS. A catchy soundtrack of boy bands, girl groups, and angsty pop-punk buzzes steadily throughout. Even the pre-show setup lends nostalgic ambiance: the New Ohio’s lobby is decked in teen-mag posters and shiny streamers like a middle-school dance, and performers distribute ‘90s candy and rosè-spiked Capri Sun as we take our seats. Millennials will cherish these nods to the media of their youth, but there's laughs aplenty for anyone who’s enjoyed (or endured) the decade’s pop culture.

As audiences’ steady giggles and “awws” attest, Dear Diary LOL is as relatable as it is funny, inviting us to empathize with our younger selves as we laugh at their extremes. Beneath its hot-pink surface beats a tender heart and the universal queries of adolescence: Am I alone? Am I worthy? Does anyone understand? As the piece shows, nearly everyone has walked this bumpy road and emerged better for it. And that, in the timeless words of Christina Aguilera, is beautiful, no matter what they say.

(Dear Diary LOL plays at The New Ohio Theatre, 154 Christopher Street, through July 28, 2018. Running time is 75 minutes, no intermission. Performances are Wednesday 7/25 through Saturday 7/28 at 7. Tickets are $20, $16 for students. For tickets and more information visit antigravityperformanceproject.org and  newohiotheatre.org.)