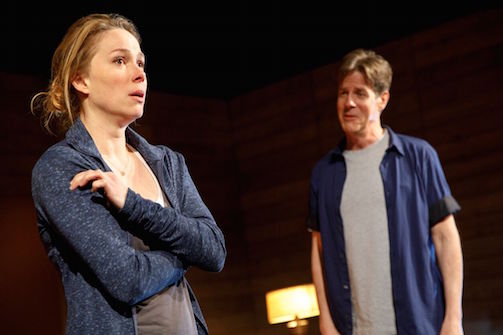 BOTTOM LINE: In Anthony Giardina's Dan Cody's Yacht, the clashing of money-motivated parents sheds light on our educational ecosystem, and the difference between private school privilege and public school "potential."

In a fictional Massachusetts suburb, single mother and high school English teacher Cara Russo (Kristen Bush) is given the financial opportunity of a lifetime during her dreaded parent teacher conferences. Kevin O'Neill (Rick Holmes), the father of one of her laziest students, has a bone to pick with her regarding the failing grade she gave his son for a plagiarized essay on The Great Gatsby. Kevin is a smooth-talking risk analyst and financial advisor living the dream of any gay middle-aged father. He spun his own golden life out of nothing, and lives in near perfection—aside from his qualms for his deadbeat, over-privileged son's rapidly approaching nothingness of a future. To resolve this one stain on his perfect life, Kevin attempts to bribe Cara into flipping the grade, but she remains rigid in her principles. He does, however, tap into Cara's financial insecurities when he offers to let her join his monthly "investment club," where she realizes her chance to multiply her money and achieve the life she deserves. The pressure is multiplied by the chance to place her daughter Angela (Casey Whyland) in a far superior school system just in time for senior year, setting her child up for an ideal future.

As the two become close friends and Cara becomes enamored of how the other half lives, the play is resonant of a Gatsby-esque twist of fate where presenting wealth becomes everything. In their portrayal of the toxic relationship between Kevin and Cara, actors Bush and Holmes deliver delightful chemistry and well-earned vulnerability. In one scene, Kevin asks Cara, "lay out your financial life for me. Right here. Right now. On paper. Income. Monthly nut. Savings. Potential raises. Mortgage. Equity. Everything. Strip yourself bare." The two open a blunt, intimate dialogue about the financial nightmares of being an American homeowner, car owner, and parent. Bush delivers a fantastic, laser-focused character, seeming as though she's about to burst in every scene from the immense pressure she places on her socioeconomic morals. Holmes couples this with his lax devil's advocate character, often with booze in hand to make the big decisions easier to grapple. Dan Cody's Yacht allows us into a clean-cut plot concerning two single parents raising two drastically different children on the brink of adulthood, and provides deeper insight into the difference between privilege and potential.

From a writing standpoint, Dan Cody's Yacht poses a question on finances similar to the one Spring Awakening poses concerning sex: if we as a society treat the discussion of major life topics (understanding finances, sexual preference, investing, sex in general) as taboo, aren't we destined to crash and burn? When we treat sex as dirty in principle, we tarnish the pleasure of it. When we treat money as the embodiment of the devil, our financial lives become hell. In the novel, Gatsby is liberated when he climbs aboard Dan Cody's yacht and embraces the life he wants. Cara Russo has the same chance to metaphorically climb aboard when Kevin teaches her to view money as salvation, not corruption. Cara's daughter Angela presents yet another obstacle for Cara's morals; she is driven by being lower middle class, and doesn't want her mother to displace her strictly out of her own personal hopes to keep up appearances.

Although it is worth pointing out that middle-class, white America is not the subject that needs the greatest voicing right now, Dan Cody's Yacht does present a wonderful appreciation for a parent's grit, and the sacrifices made in the name of capitalism on a daily basis.

(Dan Cody's Yacht plays at New York City Center Stage 1, 131 West 55th Street, through July 8, 2018. The running time is 2 hours with an intermission. Performances are Tuesdays at 7; Wednesdays at 2 and 7; Thursdays and Fridays at 8; Saturdays at 2 and 8; and Sundays at 2. Tickets are $90 and are available at nycitycenter.org or by calling CityTix at 212-581-1212. For more information visit dancodysyacht.com.)