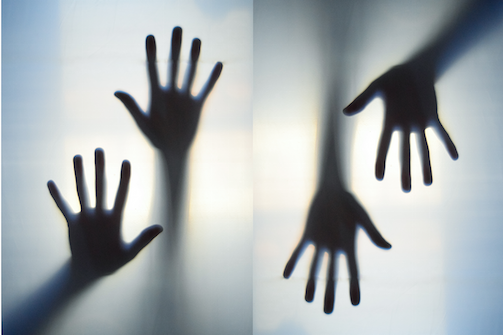 Sarah Kane’s fourth play Crave is consumed by a young woman “expressing [her] pain without easing it.” Haunted by her own short-but-tarnished life, the play rests within her crumbling flat. She regresses through a minefield of haunting memories, transforming her pathetic bed and writing table into strangers’ beds, failed attempts at therapy, and the passenger seat of the car where she was molested by her own grandfather.

The ensemble works equally to portray every flicker across the woman’s mind, with each player representing a theme rather than a single defined character. A (Daniel Chavarriaga) presents toxic love with a puffed chest and hungry eyes; B (Jack O’Brien) slumps and preaches in portraying a euphoric distraction found in hard drugs; C (Morgan Price) quakes with guilt and fear, hoping to merely survive; and M (Kenny Hahn) holds the greatest power in embodying a family foundation long-since broken by wandering, violent hands. These embodied “cravings” don twisted masks as they move through the tattered space and taunt the young woman with expertly crafted monologues. While this casting breakdown may seem to present a daunting task for storytellers, Sarah Kane’s direct-but-poetic language aids in shaping a concise story. While this is indeed a big “concept” piece, there’s no need for an audience to be afraid of “not getting it”; Crave takes care of the viewer.

With direction from Adam Coy, what could easily be a performance of monologues, dependent on the severity of words alone, becomes refreshingly physicalized. Oftentimes, young theatre-makers rely heavily on having characters yelling at each other, engaging them in conflict tableaus that are familiar to an audience, but that tend to plateau quickly, quickly desensitizing an audience to the aggression. Whereas here, Coy employs a specific physical language for each moment, allowing Crave to mark itself far outside of realism, which seems to be a potential trap with this writing. Instead of showing an interaction between two people, the movement—along with ambient sound and lighting design—creates instead the feeling experienced in a moment. Pulsing red lights and creeping actors create paranoia instead of just allowing the text to describe paranoia.

It’s refreshing to see a play that just “does the damn thing” instead of talking around it. I found myself having the most fun when the actors were engaged in playing with the space. In this way, the flair for physicality made me stop to appreciate Egg & Spoon’s allowance for the art to become a playground. Whereas a realistic approach might well produce sterile barriers, this production creates a language that is so richly physical, both sexual and violent moments are open for exploration. For example, in simulating sex, the actors are placed several feet apart while moving in tandem, allowing the intensity to remain without adding gratuitous exploitation to this already shocking piece.

Egg & Spoon Theatre Collective, a new-to-the-scene Off Off Broadway company, creates work “with a beating heart” in productions that are “daringly minimal, but alive to what’s around us, and what’s inside us.” Although the immediate subject matter of Crave is likely more severe than what's around and inside most of us, the protagonist’s fears are tangible: “where do I stop?," "where do I start?,” and “why can no one love me the way I want to be loved?” Though dark, Crave sustains such a strong performative energy that the chaos stops with the curtain—though their complimentary “matinee mimosas” certainly keep the audience sunny, too.

(Crave played at the Access Theatre, 380 Broadway, through November 18, 2018. The running time was 50 minutes with no intermission. Performances were Thursday and Friday at 8; Saturday at 2 and 8; and Sunday at 2. Tickets started at $17. For more information visit eggandspoontheatre.org.)