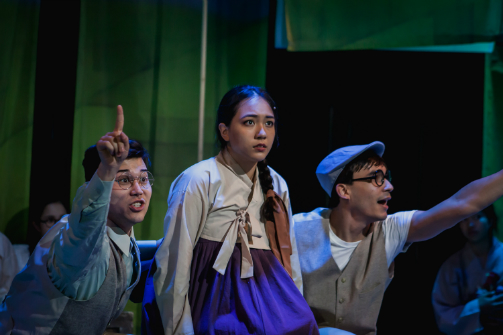 BOTTOM LINE: Based on true events, Comfort Women tells the story of a young Korean woman forced into sexual slavery by the Imperial Japanese Army during World War II.

War brings about atrocious and unforgivable events. During World War II, the Japanese Imperial Army created hundreds of "comfort stations," filled with Korean teenagers they abducted or lured there. These  girls were raped by fifty to one hundred soldiers a day. The new musical Comfort Women, with a book Dimo Hyun Jun Kim, Osker David Aguirre, and Joann Miese, music by Bryan Michael and Taekho Park, and lyrics by Bryan Michael, brings attention to these awful acts.

Directed by Kim, the musical follows the story of a Korean young woman, Goeun (Abigail Choi Arader), as her brother Songwon (Ben Wang) is taken by Japanese soldiers. Mr. Komino (Sam Hamashima) and his assistant (Jake Vielbig) show up to tell the townspeople of good jobs at a sugar factory in Japan. For the opportunity to earn money and get her brother back, Goeun chooses to sign the Japanese paperwork she cannot translate. Soon she is on a boat, where she meets other young women also headed to the Japanese factory. Goeun, Youngsun (Sara States), Namsoon (Leana Rae Concepcion), Malsoon (Shuyan Yang), Soonja (Roni Shelley Perez), and Jinju (Emily Su) bond over their excitement of what is to come, but are shocked when soldiers barge in and kill a man right in front of them. They realize that they have been lured away from home under false pretenses. The girls are taken to a comfort station in Indonesia and forced to service the soldiers there. In this cruel new life there is one ray of hope, and that is Minsik (Matheus Ting), a Korean soldier in the Japanese Army. Does he have the courage to stand up to the Japanese soldiers who mistreat him and the women?

The production shows a noteworthy attention to detail. We are immersed in this horrific environment through the careful and deliberate work of set designer Stella Hyun Joo Oh and lighting designer Byung Chul Lee. At stage left, branches intertwine with war propaganda posters, setting the scene. Bamboo blinds serve as the curtain at the front of the stage with the show's title projected onto it prior to the start. The beautiful effect of the projected words on the blinds is that light is able to shine through the cracks, with bits of light hinting at set pieces on the stage behind.

The horrific events depicted in Comfort Women may seem far-fetched, but they are based on true events; this chance to learn about a part of history that isn't often discussed makes this musical worth seeing for those interested in history and gender, and World War II buffs. The scenes of sexual assault are delicately handled, depicted through interpretive dance. Although the show gets off to a rough start, these young actors eventually prove their depth (though some are stronger than others). The show has a few too many songs, so that at times one seems to blur into the next, but overall the production is strong with varied and compelling characters, beautiful lyrics, and quality stage combat. It's also worth pointing out that Comfort Women's creative team is largely Asian and Asian American; the cast exclusively so—both are rarities in Broadway and Off Broadway productions. This alone is worth celebrating.