Written and Performed by Jessica Creane; Directed by Joseph Ahmed and Amy Blumberg 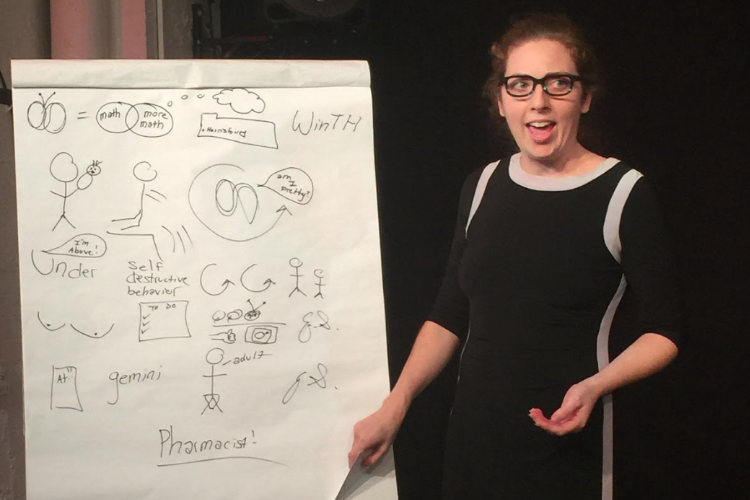 BOTTOM LINE: Jessica Creane tackles the misogyny of the scientific community, sexual liberation and the fear of velociraptors while inviting the audience to play games.

Unlike the randomness generated by a system with many variables, chaos has its own pattern, a peculiar kind of order. This pattern is known whimsically as a strange attractor, because the chaotic system seems to be strangely attracted to an ideal behavior.

Upon entering the Mathematical Scientists Annual meetup, we are offered name tags, pretzels, and Oreos, and asked to sign in. When I notice that, in addition to my name and my email, I am required to provide the name of my first crush, I suspect that things might not be strictly scientific. And boy am I right. Chaos Theory, an interactive solo show, developed and performed by Jessica Creane, is back in town. After its initial run at FringeNYC in October, Chaos Theory gets a way-too-short extension at HERE. In a strange way, it's a perfect show for those who’d like to reassess their goals and values before stepping into 2019. But don’t get into a meditative mood—with this blend of games and theatre, it’s about to get a bit chaotic.

The keynote (and only) speaker, Dr. Genevieve Saoch (Jessica Creane), radiates enthusiasm the minute she enters. Her elegant black sheath dress is paired with white heels, silly white ruffle socks, and dinosaur earrings (costumes by Evelyn Langley). This free-spirited woman is passionate in science and love alike, something that has apparently gotten her into trouble and out of her dress on stage. But let’s not get ahead of ourselves. First, some chaos theory. While I can’t attest to the accuracy of the scientific component, terms like the butterfly effect, fractals, and self-similarity seem familiar. Dr. Saoch refreshes our knowledge about “the science of surprises,” sometimes speeding up to the point where it is impossible to distinguish words.

To illustrate her point, this Chaologist tells a story about her childhood crush in a mathematical formula, reads poetry, sings, and leads volunteers into games. In one, two teams of four are tasked with drawing a perfect circle. One person on the team must, at all costs, ensure that the circle is drawn, while another person is tasked with preventing that. The third person is told to perform the minimum work and take all of the credit, and the fourth person doesn’t care about the circle at all—their only task is to seduce everybody in the room. Sounds a lot like a dysfunctional scientific research group.

When it comes to human relationships and the ethics of the academic community, it is not always clear what is orderly and what is chaotic. In another “game” the audience is encouraged to yell “order” or “chaos” at different objects and events Saoch calls out. But the hubbub and laughter quiets down as the survey becomes a confession. Is it “order” or “chaos” when the “room full of penises” at a cigar club determines who gets to be published? Or when, because of a single embarrassing incident, a female researcher loses her career while her male counterpart gets glorified?

During this scene, Saoch stands in front of the audience completely naked and vulnerable, clenching the clipboard with her shaking hands. This after a spontaneous disrobing that is empowering and freeing—while talking about a sex game involving a velociraptor (don’t ask). Science, much like romance, can lift you to a new plane of existence. But when the variable of the institutional “order” comes into the equation, be it academia or the patriarchy, one might be smacked on the concrete, crushed by the powerful. Luckily, there are ways to conquer crippling depression, like moving towards your passion, however strange it is, and forming community bonds along the way.

For the last part, Dr. Saoch presents the concept of “Strange Attraction” and invites the entire audience on stage. This becomes highly interactive and potentially quite personal, but anybody can opt out by using the safe word “dildo.” On the surface this might all seem like a bunch of nonsense tasks, but the sheer silliness of these games, as well as of Chaos Theory overall, has a refreshing, even life-assuring, aftertaste. Jessica Creane gives an electric performance and is especially good when she interacts with the audience (which is all the time). Creane extends her invitation to play even after the show via Instagram, and in the back of the program is the game “At Any Point A Velociraptor Might Enter This Room.” Chaos Theory is a phenomenally successful theatrical experiment, and I hope to see this Philadelphia-based artist back in New York soon.

Chaos Theory is written and performed by Jessica Creane. Directed by Joseph Ahmed and Amy Blumberg. Costume and Prop Design by Evelyn Langley.