By Eliza Bent, based on a story by Anton Chekhov; Directed by Stephen Kaliski
Produced by Adjusted Realists in association with Weber State University 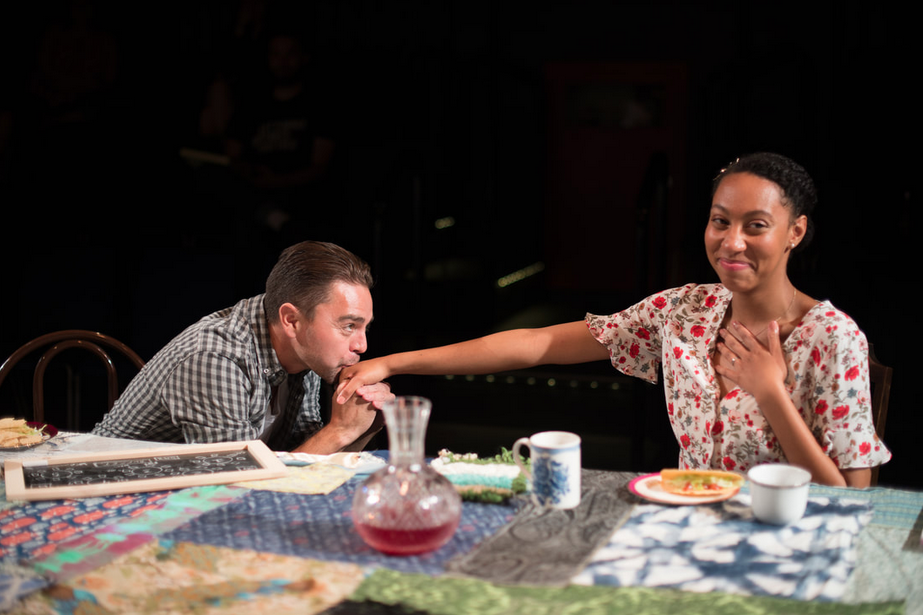 Jeremiah Maestas and Regan Sims in The Beyoncé. Photo by Mia Isabella Photography.

Right off the bat: The Beyoncé has nothing to do with "Queen Bey." The play is a humorous retelling of Chekhov's short story "The Fiancée," otherwise translated as "The Beloved." Beloved plus Fiancee equals Beyoncé: it's a playful portmanteau from playwright Eliza Bent, not a topic heading.

In this production, "The Beyoncé" is the pet term which young Nadia (Regan Sims) assigns to her fiancée Andre-Andre (Jeremiah Maestas). Her future husband is rich, but "dim" and unmotivated. Their families are also well-off and directionless: Nadia's mother and grandmother live on a beautiful estate decorated pitch-perfectly by Sam Transleau, featuring exposed lightbulbs on exposed beams and a large, hand-stitched silk quilt as a table covering. The family graze and munch constantly in a well-stocked kitchen without a care in the world as sound designer Andrew Lynch's grandfather clock marks ominous time.

Despite the home's upcycled Pinterest aesthetic, Nadia's mother Nina (Rachel McPhee), a Bohemian actress-type who pairs fake eyelashes with loose fabric tunics (thanks to William Mellette), scorns "ANY of this DIY crap" (sic) when it comes to wedding arrangements. Life is meant to be all play, no work—at least that's what it should look like to impress the neighbors with the wedding of the season. But Nadia's dread is increasing as the big day approaches, and her friend Sasha is starting to sense Nadia's lack of conviction.

Nadia's and Andre-Andre's families also live in a lazy, superficial world linguistically. Conversations are full of half-meant malapropisms and punning, which conspire to be the lifeblood of this show (perhaps a bit like Clybourne Park, which takes a similar approach to lazy speech and hollow wordplay). Sanctimonious vegan Sasha (Roger Manix) ironically drawls "I'm Confucius" when he means "I'm confused." Gran Marfs (Maggie Low), the gentle matriarch of the family, struggles to remember the name of omnipresent Mrs. Meyers brand cleaning products: "Myers-Briggs?" she guesses, as she claims to treat the family maid (Andrea Aranguren) like a member of the family. Andre-Andre sings "Blackbird" by the Beatles to fill an increasingly awkward silence at the dinner table, an ominous song about a moment of escape. Each misplaced or butchered word says something about the speaker's hidden intentions or place in the world. It's a very clever script.

But somewhere between Nadia's meditation on her dreams and a final decision about the wedding, the play has taken its stance and evolves no further: it sits on a fashionable knife-edge between idealism and irony, as it does between congratulating Nadia's idealism as a woman seeking her way in the world, and the irony of Nadia needing to trade on the privilege she's fleeing in order to succeed elsewhere. Nadia and Sasha discuss Nadia's one-time hopes to be an archaeologist—no, an anthropologist—and Sasha urges Nadia to return to school: "the more educated people there are on this planet, the sooner we’ll solve climate change and issues of injustice and the Kingdom of God will come to Earth. Hallelujah. Amen." The irony Sasha lays into these words can't erase the fact that educated people most easily become that way, as in Nadia's case (on short notice), with a trust fund. Although she hungers for radical change, Nadia's dreams of a life away from her "Beyoncé" threaten not to lead her far from her current path at all. Yet her awareness of this fact flickers out before it can change the direction of the play.

As unsatisfying as this is, the performance delivers in every other way, with humor and panache by a talented cast and inspired design team. Consider seeing the show with a friend—perhaps the one with the house in the Hamptons and a lifestyle blog—as a conversation starter.