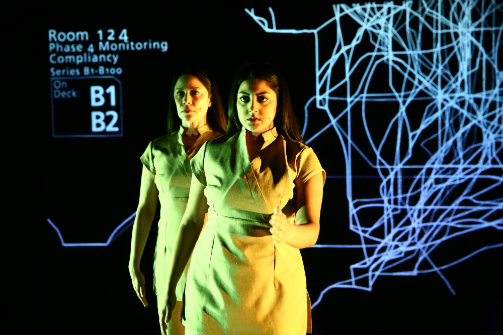 BOTTOM LINE: Assembled Identity is a resonant, ambitious investigation of what it means to be unique, when your body isn't.

Assembled Identity tells a classic clone story: twin American women enroll as research subjects at a mysterious cutting-edge treatment center that claims their participation will help cure a fatal “condition” the two of them share. The details of the condition are never explained, but over time and a number of onstage medical tests it becomes clear that rather than twins, the two women are exact copies of one another. They later learn that at least sixteen other clones of their bodies are now gathered at the center, from around the world, speaking different languages. The twins butt heads over their identity crises, and are driven further apart by the treatment center’s sinister agenda. The story has some plot holes, but doesn't demand more suspension of disbelief than comparable stories in the genre. It's an engaging plot, but not groundbreaking.

The show earns its place at HERE by using the story as a vehicle for broader philosophical exploration, incorporating non-narrative segments into the action. These idiosyncratic breakout moments of song, dance, and interaction with recorded voices do feel out of place, but the production is strong enough to support the momentum of the story through these philosophical, aria-like pauses. There’s a song-and-dance number about the cellular composition of skin as the twins touch each other. There’s a chant about originality. There’s even a brief sequence where one of the clones interacts with the sounds of what she believes are children in the facility, but which turn out to be the disembodied consciousnesses of dividing embryos of future clones. It’s a lot of fun, and it's pure theatre—it wouldn't be nearly as effective in a novel or on film. Most importantly: the story still gets told.

Mariana Newhard and Lipica Shah perform a flawless duet: relationships developing between eighteen versions of the same body remain intentional, diverse, and interesting. The show’s large team of dialect coaches deserve special recognition for helping make their transformations possible. David Bengali’s projection designs are a treat, lending the medical testing environment just the right cutting-edge-but-not-futuristic feel. The “auroras” that characters step into for analysis are mesmerizing. The lighting complements the projections well, with flashes of stabbing light and sinister sidelights illustrating and foreshadowing the facility’s indifference to the clones’ pain. The sound quality matches the crystal clarity of the projections. The song and its choreography is engaging, albeit a little tentatively performed (but that was early in the run).

As fun as it is, and as much as it is a treat for any sci-fi fan with their thinking cap on,Assembled Identity has bitten off a huge topic and can’t offer the depth of the novels, films, and TV series that might come to mind—Nancy Farmer's House of the Scorpion and Kazuo Ishiguro's Never Let Me Go, Total Recall, Orphan Black, Battlestar Galactica, and any number of comic books and space operas. For all that Assembled Identity captures and crystallizes, there’s a lot it misses or only gives a passing nod to, for sheer lack of time. The questions are just too big, with too many angles, for an hour-long live piece to fully engage.

Rather than focus clearly on one or two specific aspects, Assembled Identity sometimes seems to be conducting a survey study of philosophy, social justice, and even medical ethics. A darkly-funny promotional video segment on the medical facility begins to sketch out the world of the piece, but the "world outside the walls" remains underdeveloped as well. But while its brevity is unsatisfying to someone who wants more of this story and its strange, wonderful asides, this is a show worth seeing, if only as a reminder that humans are complicated, composite, and endlessly creative. It's unusual to see science fiction being played out on stage so effectively by such a skilled team. HERE's to more like this in the future (rimshot).