By Sophocles; Translated and Directed by Bryan Doerries
Produced by Theater of War and Harlem Stage 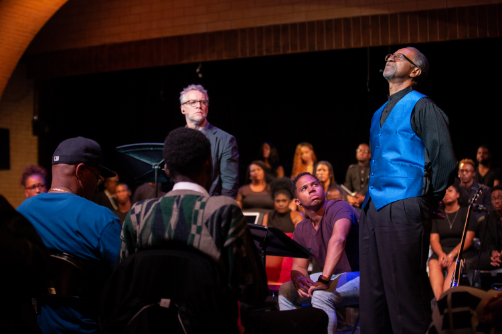 BOTTOM LINE: Through Antigone, Theater of War creates dialogue with traumatized communities in order to help with the healing process.

How does a 2500-year-old play still resonate today? And when we recognize the things preserved by time, what do we do about it? These are the questions raised by Theater of War’s Antigone in Ferguson.

After a live choral concert, Bryan Doerries, who has translated and adapted this version, introduces the piece as a “no-frill, full on frontal-assault version” of Sophocles’ tragedy about a woman who stands up to the state. The purpose of this performance is to create a choir of oppositional viewpoints. The piece becomes a direct reaction to Michael Brown’s murder in 2014, a tragedy that feels inappropriately distant today amidst the incessant cases of violence against black men across the country.

For those who need a refresher from high school English, the plot of Antigone is thus: Antigone, the teenage daughter of the disgraced (and now deceased) king Oedipus, dutifully buries her rebel brother Polynices, consciously going against the rule of Creon, current king of Thebes. Creon has given Antigone’s other brother Eteocles, who fought for the state, a proper burial, while leaving Polynices’ body to rot in the elements. The king sentences young Antigone to be buried alive for her transgression; in doing so, he drives his own son Haemon to death. It’s a tragedy through and through, caused by none other than the ego of one man in power, edged on by the echo chamber of an audience without the will to voice dissent.

Without any props or costumes, and presented as a reading featuring a rotation of high profile actors, the impact of Antigone is dependent solely on its words. Educator and composer Phil Woodmore, a Missouri native, created a virtuosic volume of music for the show, transforming the live choir into the chorus of the play, who not only provide contextual information, but also react to the main characters.

But the point of this production perhaps is not about the play at all. After the reading is over, Doerries and co-facilitator De-Andrea Blaylock-Johnson connect the audience with a panel of speakers who are present to become that “choir of oppositional viewpoints,” and once the floor is open, the most illuminating part of the evening begins.

From the get go, the production makes it clear that it’s not entertainment, but a lens through which to examine how our reality is oversaturated with violence. A quote that has become a motto for Theater of War, brought up at every event I’ve attended over the years, is that these ancient Greek plays were written to “Comfort the afflicted, and afflict the comfortable.” And this willingness to be open ensures that the audience feedback is thoroughly honest. Unlike other talkbacks, the discussion after Antigone in Ferguson is divisive and emotionally charged. For instance, one woman voiced her disappointment in the production’s decision to honor Ferguson's police department, sharing her experience being tear-gassed during demonstrations there. On the other hand one performer, a former drama and music teacher of Michael Brown, shared how he came to terms with having to honor his student’s memory while working with members of the police.

The conversations do not end in agreements but are carried out with passion and respect. Most importantly, they lead to more important questions and discoveries. “But what is enough?” asked one audience member to a member of the police who commented that not all police are bad. In moments of self reflection, we cannot help but consider this question. Living in a time of high stakes and overwhelming oppression of people treated as lesser because of the color of their skin, what does it mean to be ally? What is becoming starkly clear is that being apolitical is a privilege, and being silent can be the same as being an accomplice to the guilty. “This City has tinnitus,” said another audience member. There is so much violence happening every day that we are no longer affected by it. We have the capacity to accept, to tolerate suffering when it’s not applied directly to us, but the tyranny of apathy is a slippery slope, as it is a insidious, but cancerous disease.

The thing I most respect Theater of War for is that the company stays true to its mission of building bridges between communities, as well as providing a safe space for dialogue to happen, especially on tough subjects. This is an organization that understands its role in the intersection between art, education, and community. If you are looking solely for entertainment (which is not to say this production lacks humor—there are plenty of moments), Antigone In Ferguson is not for you. But if you're open to it, you may well walk away a little more open, and also maybe somewhat ashamed of not doing more—by god I am.

(Antigone In Ferguson plays at Harlem Stage, 150 Convent Avenue at 135th Street, through October 13, 2018. The running time is 2 hours 15 minutes with no intermission. Performances are Tuesdays through Fridays at 7:30; Saturdays at 3 and 7:30. Tickets are FREE with RSVP at harlemstage.org.)