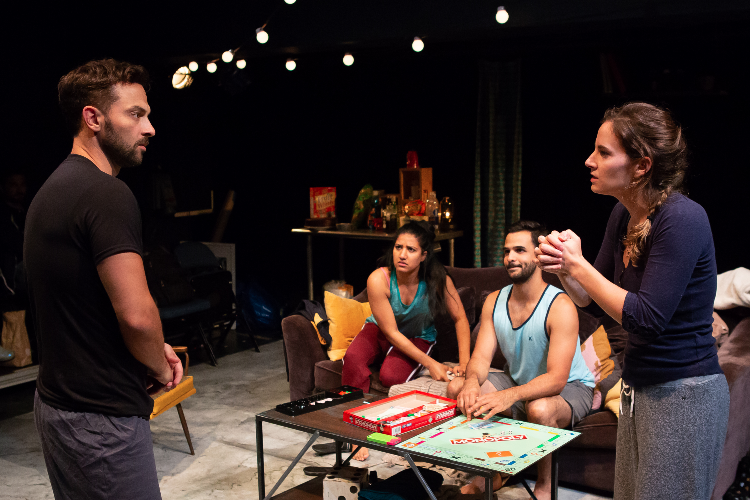 BOTTOM LINE: This compelling drama about emotional connection (or lack thereof) is thoroughly engrossing from start to finish.

Characters on the autism spectrum have been have been appearing on the stage more often in recent years, with some portrayals more successful than others. In Lesser America’s new production Agnes, Charlie (John Edgar Barker), a central character with Asperger’s Syndrome, is never depicted condescendingly; rather, his struggle to experience emotional connections becomes reflective of the fraught connections around him. He conducts research by traveling around the country, recording people as they share their experiences with life-changing emotional connections.

As the play begins, Charlie has just returned home, having gone missing for two weeks while he embarked on his secret project. His high-strung sister June (Laura Ramadei), who has spent most of her life as his caretaker, is livid, telling him she had been worried and even called the police. Her anger, however, quickly dissipates as she is focused on preparing for another disaster: the arrival of Hurricane Agnes. Armed with endless supplies from Costco, June is getting ready to hunker down for a few days along with her live-in girlfriend Elle (Mykal Monroe), a med student, and roommate Ronan (Hiram Delgado), who is covering up the pain of his recent break up with endless wisecracks.

Ronan has been using dating apps to move on from his ex-girlfriend, and reveals that he "swiped right" on someone that June knows. Surprise!—she is about to show up to the apartment to ride out the storm with them. The mystery guest turns out to be the blonde and statuesque Anna (Claire Siebers), who radiates sexual energy from the moment she enters the room. Everyone but Elle quickly seems to fall under her spell. We learn that June and Anna had a very close friendship that briefly turned sexual and that she was Charlie’s first kiss. During a drunken game of Truth or Dare, Anna reveals her desire for June and jealousy towards as Elle as she attempts to poke holes in their already fragile relationship with each probing question. As the storm rages on outside, an emotional one is brewing inside among the characters, one that will forever alter their relationships.

While some of the plot turns might be well suited for a steamy soap opera, playwright Catya McMullen explores the characters’ inner motivations and how desire and the need to love and be loved can go awry. While the production initially is heavy on jokes (carried out well by the cast and director Jenna Worsham), it soon becomes focused on heavy conflict as truths are finally revealed. However, while the choice to stage two pivotal arguments side by side simultaneously certainly helps to add to the atmosphere of an emotional storm, it also becomes frustrating to watch. As Worsham also has the audience seated on either side of the stage, some audience members miss out on seeing the characters’ faces during powerful scenes.

Each member of Agnes' cast meets the challenge of their character's emotional journey. Newcomer John Edgar Barker is especially impressive with his depiction of Charlie’s particular struggles. Laura Ramadei is also engrossing to watch as she vacillates between her sense of obligation and her true desires. Angelica Borrero’s set makes the most of 59E59’s small theatre, managing to suggest a four-bedroom apartment, despite the limited space. Once again, Lesser America lives up to their well-deserved reputation for creating compelling, cutting-edge theater.