What Would Cathy Do?

Written and Directed by Chris Aronsten
Produced by The One Festival 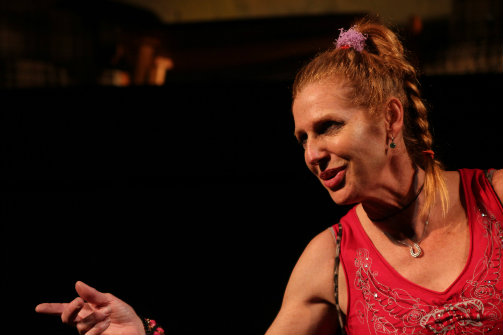 Skye Wansey in What Would Cathy Do?. Photo by Kathy Luu.

A few obscenities push our female protagonist onto the stage. Our Jane Doe of an actress (Skye Wansey) is the proprietor of this venture into method acting that will pave her the way down wrong corners. The only name we’re given—Cathy—belongs to the simple-dialogued drug addict our unnamed actress is set to play on a feature film. It's the role of a lifetime, but it's just a matter of time before our actress derails and becomes something she’s not.

Actually, the lines between Cathy and the actress seem to have already blurred by the time we meet her. The lack of name for the narrator suggests she might as well be Cathy, already molded by her smack dealer. Admirably, Wansey plays that fine line where we don’t really know who that frenetic person in front of us is. Even Wansey’s stumble through Chris Aronsten’s script makes the story curiously larger than it is. Cathy overtakes the actress who fogs Wansey’s performance.

Cathy (how I will regard the character from here forward) embodies a type of actor dedication that could be a rare one, but not an unfamiliar one. We’ve all heard the stories about Meryl Streep during The Devil Wears Prada or Daniel Day-Lewis in any one of his movies. Cathy, on the other hand, prefers Brando, whose portrayal of Walter E. Kurtz in Apocalypse Now also took him down her type of void.

In the vast wasteland of an empty stage, Cathy tries her hardest at what she’s passionate for. It is enough space for her to get lost in, for her to fidget with her backpack and script to make sure she hasn’t lost track of reality completely. She knows she can achieve what her idols have, even if she’s too embarrassed to share her name. Wansey’s bittersweet portrayal elevates Cathy from page to something palpable. The show’s Cathy might actually be a better role than film Cathy.

Yet, Brando had the resources to deal with this psychological burden if it came to be so. Like the majority of struggling artists, what happens to Cathy when her waitressing gig isn’t enough? After all, she is a middle-aged Australian. Like many others, she’s just taking care of a dream that almost got away. Who are we to judge, then?

What Would Cathy Do? is written and directed by Chris Aronsten. Lighting Design is by Omayra Garriga.

The cast is Skye Wansey.