Created and Produced by Hit the Lights! Theater Company

Off Off Broadway, Play with Music
Ran through 4.2.17
The Hive, 20 Cook Street, Brooklyn 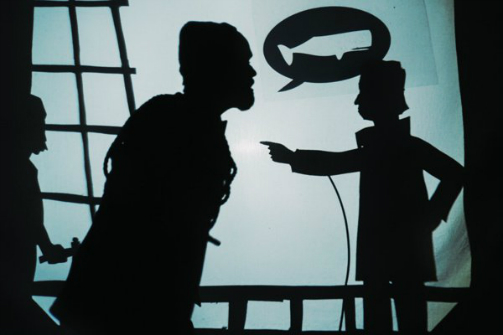 BOTTOM LINE: Puppets and punk rock meet in the world of Moby-Dick.

Have you ever dreamed of joining the crew of a ship in the nineteenth century and sacrificing years of your life in the hope that oil prices will be high when, or if, you return? Are you prone to bouts of obsession and/or madness? Do you want to learn about candles? If you answered "yes" to any of these questions, you'd probably feel at home on the deck of the Hive, a whaling vessel named affectionately after a little theater in Brooklyn which Whales makes its home.

The play—adapted from the novel Moby-Dick and created by the members of Hit the Lights! Theater Company—has a lot of parts to it. The whole evening feels kind of like an old variety-entertainment show. There are musical performances, games of chance, and very targeted infomercials, all designed to emulate the life and circumstances of the whaling industry in the 1800s. There is a lot of information that gets passed along through the performance, but the actors never let it feel like a lecture; it's really more like a party. With instruments and props, the crew keeps the show moving along at a brisk and captivating pace, always finding the comedy in the drudgery and violence that they showcase.

Events are regularly punctuated by chapters from the story of a certain sea captain, whom we watch cross the ocean in search of his White Whale. The journey is depicted entirely with shadows, cleverly deploying all kinds of shapes and materials for their puppets to create a two-dimensional world that feels very textured and complete. It's a joy to see speech bubbles appear on the screen, like in a comic, even though it's attached to the silhouette of one of the actors.

Whales also a punk-rock concert. Most of the piece is scored live by an electric guitar, sometimes joined by other instruments, all played by the ensemble. They perform a number of rock covers of old sea shanties, but the best music is the underscoring provided for the other scenes. It combines old melodies with the modern electric sound to create an ambiance that grounds the audience firmly with one leg in 2017 and the other in 1857. In addition, the timing and rhythm of the music do a lot to preserve the momentum of the play and keep energy up.

Whales is a lot of fun. There is plenty of audience participation (including drinking games), and the crew sweeps you up into the action as soon as you set foot inside. The storytelling is innovative, engaging, and educational. It's not your average sixty minute one-act.

Whales is by Hit the Lights! Theater Company, based on a book by Herman Melville. The cast is Samantha Blain, Kristopher Dean, Claron Hayden, Casey Scott Leach, Carli Rhodes, and Mikayla Stanley.