The Woman Who Was Me 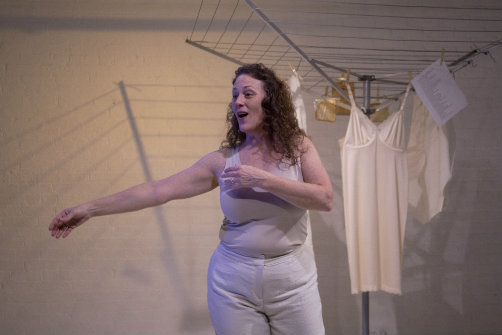 Liz Stanton in The Woman Who Was Me. Photo by Lloyd Mulvey.

BOTTOM LINE: Topical and richly expressive, The Woman Who Was Me explores gender, choice, and identity through one woman’s tale of self-actualization.

Renowned feminist author Virginia Woolf once described a woman’s life as a continent bisected by “the shadow of a sword”: on one side lies the safe, orderly route of convention; on the other, the dizzying wilderness of a life less ordinary. The act of crossing this boundary, or even acknowledging its existence, holds the threats of stigma and confusion, but also the promise of freedom. The Woman Who Was Me calls on us to bridge this gap, as its protagonist’s inner journey reflects our own search for meaning and autonomy.

Equally the subject and the narrator of her story, middle-aged Lanie (Liz Stanton) shares with us the events that led her to question her existence and seek greater fulfillment. Like the mythic metamorphoses to which she refers, Lanie’s world transforms when a stranger’s kiss throws every aspect of her life, from marriage to motherhood to authorship, into upheaval. Whether this chance encounter was real or imagined, it shatters the complacency into which she has fallen, unearthing suppressed desires and revealing possibilities as exhilarating as they are harrowing. Plumbing her newfound emotions through a string of sexual affairs, fantastical reveries, and fragmented writings, Lanie reviews her life, and the choices that shaped it, with expressive whimsy and acute perception.

Through Lanie's changed outlook, the mundane becomes transcendent: sensual nymphs emerge from a park's trees and poolside murals; billowing clothing houses secret histories; the clunk of her ceiling fan becomes a driving salsa beat and a brutal chopping mechanism for her remaining years. Alternately, these surreal visions give way to startling clarity as Lanie comes to grips with her husband’s heart-wrenching apathy and her twofold love for, and resentment of, her young son. Through this nonlinear but fiercely authentic search for self, she finds the strength to act on her desires and live in alignment with the truths they reveal.

Poignant in their simplicity, the show’s design elements underscore Lanie’s hazy search for self and highlight the dreamlike mental and physical realms she traverses. The white-and-beige palette of WT McRae’s sets and Natalie Loveland’s costumes embody the blandness Lanie longs to escape, but, when coupled with Kate Jaworski’s primary-color lighting and Victoria Pike’s video projections, function as a blank canvas for her longings, fears, discoveries, and creations. A freestanding, V-shaped clothesline forms an apt centerpiece: evocative of both female anatomy and domestic duty, it's where Lanie airs her physical and psychological laundry, as well the bed of her anguish and pleasure, and the trees under which she seeks shelter and insight. While some of the show’s sonic and video components seem underdeveloped, combined they successfully encompass Lanie’s shifting self-conception and enfold us in her story.

The “second act,” entitled “Women’s Voices, Women’s Choices” incorporates the audience through a hybrid panel discussion and extended talkback. As the show begs for further discourse, this segment forms a structured, yet organic, epilogue to what we have witnessed. With show assistants as moderators, Stanton interviews a rotating assortment of female guests about their personal experiences and connections with the piece’s subjects. Sylvia Brown, a collegiate English professor and the show’s dramaturg, was the featured guest the night I attended, so the conversation took a theoretical note, delving into the play’s narrative influences, archetypes, and production history. Audience members, responding to the first act, reflected on such topics as body image, cross-generational feminism, and internalized misogyny. With additional guests ranging from directors and filmmakers to attorneys and psychologists, and viewers’ differing insights, I would be interested to see how these discussions might vary with each performance.

Though recent years have seen significant intersectional strides, feminism’s various social, cultural, generational, and personal components make it impossible to conclusively define the “female experience.” However, by highlighting individual stories, The Woman Who Was Me invites us to explore the nuances of what it means to be a woman—or a human—in the world. In the shadowy but fertile landscape of self-inquiry, we, like Lanie, may face our desires, reassess our priorities, and emerge into the light of personal truth.

(The Woman Who Was Me plays at TheaterLab, 357 West 36th Street, through June 11, 2017. Running time is 2 hours with one intermission. Performances are Fridays and Saturdays at 8 and Sundays at 2, with additional shows at 7 on Thursday, June 1st and Wednesday, June 7th. Tickets are $25, $20 for students and seniors, and are available at theaterlabnyc.com or by calling 866-811-4111.)

The cast is Liz Stanton.