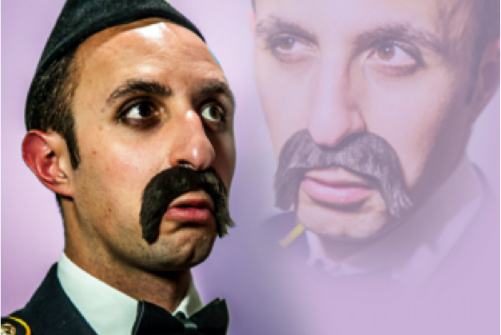 Raphael Perahia in The Wedding Guest.

BOTTOM LINE: The Wedding Guest is a lighthearted romantic comedy told from the perspective of two larger-than-life characters.

“Don’t make me talk about the war,” General Juan Dominguez pleads with his love Leela before the sound of a chopper fades in and we are thrown into his apparently shell-shocked mind.

So plays out just one of the many hilarious moments from The Wedding Guest, a show that communicates its tone from the very opening, as Dominguez half dances, half marches his way onto the stage to vibrant music and takes a signature pose downstage, and then upstage, and then downstage again (for good measure).

There’s nothing half-hearted in this solo comedy written and performed by Raphael Perahia, an eminently charming actor and comedian. Each moment seems carefully crafted in this story of General Dominguez and his rival, J’VaAnN the poet, vying for the affection of the beautiful Leela. Even the transitions between the characters occur with total specificity and timing, and not a detail emerges without a flicker in Perahia's eye, or a wry smile appearing on his face, elements that are no doubt aided by director Shea Wojtus.

As you might have guessed, this isn’t your typical kitchen-sink drama. The story and its characters seem almost removed from any particular place or time, existing instead in a funhouse-mirror version of an old-timey romance film, where characters are capable of scaling the Eiffel tower at a moment’s notice, and slam poets must open invisible (but very real) windows before beginning their performance. That world is entirely up to Perahia to communicate through his witty dialogue and specific physicalities.

As opposed to, say, a story slam, where the audience is captivated by the implications of the plot and how it all wraps up, The Wedding Guest is more a character showcase with a light story laid onto it. What makes it so entertaining is much less its adherence to dramatic structure, and more the bag of tricks and gags that Perahia draws from as the story unfolds. This is a great show for anyone who’s simply in the mood for something lighthearted and fun.

The Wedding Guest is written and performed by Raphael Perahia. Directed by Shea Wojtus.