Written and Directed by Guillermo Calderón
Produced by The Play Company 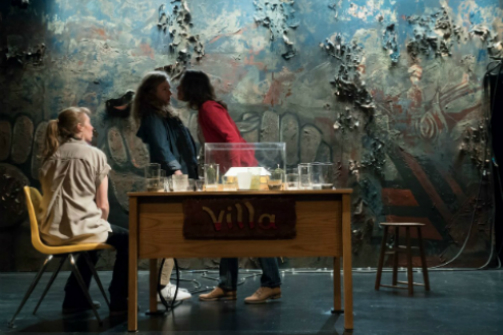 BOTTOM LINE: Villa stares down the gun of history with gut-wrenching intimacy and a disarming sense of humor.

Taken as a sum of its parts, Villa is a play about trauma and, more ambivalently, about healing. Chile under Pinochet was the site of horrors that have caused generations of pain. The trauma of mental and physical violence took a toll on those bearing the scars of torture, and on everyone around them. The collective scars of a country coming to terms with years of fascism, the trauma passed down through families, and the additional trauma of violence inflicted by victims upon other victims all continue to cause pain long after the Villa Grimaldi prison camp, the subject of this play, was razed to the ground. These legacies of pain are more difficult to understand and heal than the ground zeroes of history.

Villa's plot is simple: three women work together to decide the future of the former site of Villa Grimaldi. Should memorial funds be spent to build a museum on the old site? Should they rebuild it exactly as it stood, as a relic? Erase it with a field of grass for picnickers? The decision bears huge emotional consequences for the victims, and for the women in the room. Mysteriously, these women are all named Alejandra, all around 33 years old—and do not understand why the Board chose them for this task.

Structurally, the play is somewhat similar to forum theatre, a tradition with its own political history in South America: a problem is posed and solutions are tried on for size by the players. Rather than having a particular conclusion to the performance as a whole, there is only each possible solution's played-out success or failure. Forum theatre attempts to offer itself, the repeated proposal and examination of solutions as a group, as the healing act.

Villa runs on this principle as well: the play must conclude somewhere, but the solution the three women find seems to be more a factor of their exhaustion than a perfect conclusion. This similarity is reinforced by a staged debate where each woman advocates for a different plan for the site, insisting on lawyerly objectivity uncolored by personal preference—an impossible debate. The opening statements of this debate quickly drift into sparkling kaleidoscopic monologues and revealed secrets: a balance between structure and chaotic disclosure that stands at the heart of the piece. William Gregory's translation is a gem, which bodes very well for his translation of Guillermo Calderón's B, a new play premiering in London at the Royal Court Theatre this fall.

Crystal Finn, Vivia Font, and Harmony Stemple as the three Alejandras are an incredibly talented, balanced, generous cast. They're directed into a hyperrealism that's reminiscent of an Annie Baker/Sam Gold collaboration in its minute choreographies, though not in its pacing. These actors are absolutely present and in sync, from their wry comedy near the beginning of the work to the throat-closing, stomach-clawing intimacy they seamlessly reach by the finale. They breathe life into this already excellent work.

The production design is deceptively simple: the stage appears to have a mural on the back wall, a few chairs, and a table, with a small Villa replica placed on the table in a glass box. As the characters are forced to share more about themselves, the stage reveals its secrets as well. This is not Maria Fernanda Videla Urra's first time working with the Villa as a subject, and her sophisticated visual insight adds something claustrophobic but altogether indefinable to the largish space. Mark Van Hare's sound design is unobtrusive, after one adjusts to the visual effect of body mics taped (sometimes precariously) to each actor's cheek.

Villa glimmers with the wild, unspoken desperation of people healing like their lives depend on it. No one knows at any given moment whether they're getting nowhere or somewhere in that healing process, if what they're doing is helping or hurting. It's like catching smoke, or pinpointing the location of an electron in an atom at time X. Villa shares that devastating confusion with its audience impeccably. It is greater than the sum of its parts.

(Villa plays at The Wild Project, 195 East 3rd Street, through April 1, 2017. The running time is approximately 1 hour 20 minutes with no intermission. Performances are Mondays through Saturdays at 7:30. Tickets are $35, $45 for premium reserved seats. Student tickets are $15 in advance, $10 rush, with ID. Tickets are available at playco.org or by calling 866-811-4111. For more information visit playco.org.)

The cast is Crystal Finn, Vivia Font, and Harmony Stempel.