Written by Kate Hamill; Adapted From The Novel By William Thackeray
Directed by Eric Tucker 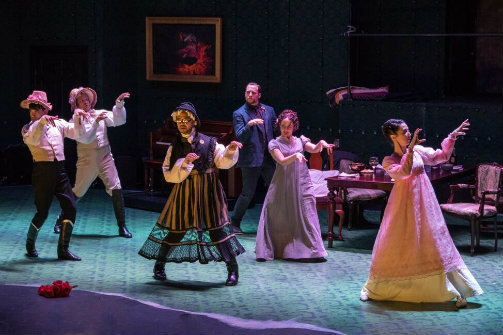 Rebecca Sharp (Kate Hamill) is a hustler who could teach New Yorkers a thing or two. Orphaned and penniless, she’s forced to fend for herself in Victorian England, a time when it’s not really great to be poor, or the fairer sex. But Sharp, more cunning than everyone else around her, is no ordinary woman. She is rebuked for her behavior, but should she be? For as the stage manager (Zachary Fine), a one-man Greek chorus, points out, "there are no morals here."

At the all-girls’ school where she’s had to toil as a maid to receive her schooling, Becky makes an opportune friend, Amelia Sedley (Joey Parsons), a sweet-natured girl of a higher station. Through Amelia, Becky almost connives her way into marriage with Jos (Brad Heberlee), her friend’s foolish dandy of a brother. Feigning helplessness, she drops her spoon one too many times and the stage manager (a worthy addition of Hamill’s adaptation) calls her out. Unashamed, she retorts that this is how she must proceed if she has to have any future. But Becky’s plans are thwarted by Amelia’s very wealthy, weak-willed, narcissistic suitor, George Osborne (Debargo Sanyal).

Both women, at the mercy of men, are hit with hard times. Becky is shipped off to be a dreaded governess for the aptly named Sir Pitt Crawley (Heberlee). She is to look after "Lesser" Pitt (Sanyal), as his brutish father refers to him; Sir Pitt saves all his love for his younger son Rawdon (Tom O’Keefe), who stands to inherit the fortune of Sir Pitt's sister Matilda (Fine), and is thus a prime target for Becky. Amelia’s father goes bankrupt and the family is forced to sell everything, and George, threatened by his father, cuts Amelia loose. Blinded by her adoration of George, Amelia doesn’t see that George’s friend William Dobbin (Ryan Quinn) who saves her mother’s piano from auction, is the one smitten with her. Over the course of the play, Becky and Amelia see their fortunes and luck change for better and worse, again and again.

The ensemble cast is uniformly excellent. The male actors skillfully play multiple roles, and the seamlessness of their efforts is on display in the first act at the busy fair. With just a few props like hats and shawls passed back and forth between them, the actors become fortune tellers, carnival backers, and their aristocratic selves. The two standouts in the ensemble are Debargo Sanyal and Zachary Fine. Sanyal is perfectly villainous as George, hilarious as Lesser Pitt, ever ready with a Scripture quote (much to the consternation of his father), and just as funny as Miss Briggs, the delicate, much abused servant to Matilda Crawley. As the Stage Manager, the very winning Fine is at turns bemused, scolding, or offering wisdom as he breaks the fourth wall. Fine stops the action to switch from playing an auctioneer of the Sedley’s property to put on Matilda’s outfit, telling the audience "We all must play our part." I’d say Downton Abbey’s Cousin Violet took a well-deserved page from Matilda’s disapproving, acid-tongued ancestor.

Hamill is pitch-perfect as the feisty and flinty heroine, a woman who’s often unlikable as she strives for a better hand than the one she was dealt. Hamill makes her relatable, playing Becky as someone mostly worthy of our sympathies and our encouragement. She’s funny, a master strategist, and determined. And she never asks for pity as she seeks to achieve what others were born into and what a man would be able to do without question or condemnation.

Hamill and Eric Tucker are working their way through the literary canon, having just collaborated on her critically acclaimed adaptation of Sense and Sensibility. As Hamill explains in the production notes, she’s "committed to reclaiming the classics for all genders," especially given the fact that most new plays and adaptations continue to be written by men. As a writer, Hamill has made some inspired changes to Thackeray’s novel. In addition to her creation of the Stage Manager and her exploration of female friendship, she’s inserted several contemporary dance numbers—these are wholly unexpected, hysterical, and brilliantly executed, enhanced by Seth Reiser's lighting and Matthew Fischer’s sound design.

Vanity Fair isn't perfect. I could have done with less of the passing gas humor, done as a group effort—but it got laughs, so what do I know? And a few scenes with overlapping dialogue between different sets of characters are difficult to hear, and perhaps need to be slowed down a bit. But these are minor quibbles. If the idea of reading Thackeray's 600+-page novel sounds impossibly daunting, you will be well served catching Hamill’s fresh, fast-paced, and wildly entertaining take.

Vanity Fair is by Kate Hamill, adapted from the novel by William Thackeray. Directed by Eric Tucker. Set Design is by Sandra Goldmark. Lighting Design is by Seth Reiser. Sound Design is by Matthew Fischer. Costume Design is by Valérie Thérèse Bart. Katherine Whitney is the Production Stage Manager.