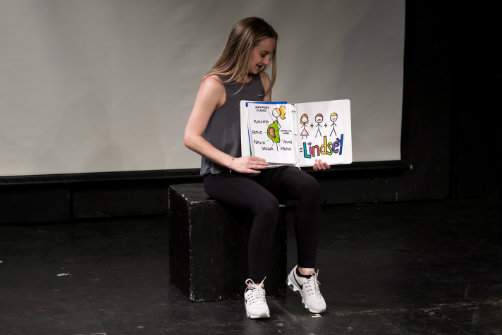 BOTTOM LINE: A light-hearted and funny solo show about a family of two fathers and five siblings, Upstream Swimming has the bones of a compelling piece but doesn’t quite hit the mark.

Lindsey Steinert is the loving daughter of Dad and Pop, two devoted men who met in a gay bar forty years ago and have been together ever since. Not a test-tube baby but a turkey-baster baby, Steinert catalyzed a series of five siblings in a family of seven: two fathers, three brothers, one sister, and...our protagonist.

Using only a chair, two small file boxes of props, and a projector screen, Steinert brings to life her vibrant, affectionate family while attempting to tackle the structures and assumptions others impose on non-traditional families. Steinert depicts her story through a combination of narrative and creative character embodiment (enacted to varying degrees of success). Accompanying her is a smorgasbord of projections of images, texts, home videos, calendars, and emails, all of which serve as entertaining addenda to Steinert’s anecdotes.

At the heart of Upstream Swimming are Steinert’s fathers, who make appearances through pictures, voice recordings, personalized bitmojis, and endearing tokens that they have passed along to their daughter over the years. We quickly learn their sweet and amusing quirks, like how every voicemail message Pop leaves for his daughter includes his name, the time of day, and the date: “Hi, Lindsey, it’s Papa. It’s about...four...fifty-two on Thursday, December 7th.” We hear maybe ten to fifteen iterations of Pop’s messages, which never cease in their charm. And then there’s Dad—whom Steinert refers to as a "boys’ boy"—who burst into the room during one of Steinert’s break-ups, kindly offering her no-longer boyfriend an Arby’s sandwich as tears streamed down her mascara-stained face. Steinert captures both Dad and Pop with lovely nuance, relaying stories that depict their fierce fatherly love, steadfast relationship, and tender familial moments.

Steinert has woven together a good story with a nice flow, and she has solid comedic chops to carry the performance. But at times, some of the bits don’t quite land: less successful are the more self-indulgent scenes that veer slightly too far away from her purported subject. Rather, the strength of her show occurs when she transforms her personal story to the universal, connecting her experiences to broader issues such as the difficulties of navigating heteronormative constructs that rarely account for deviations from the "traditional" mom-dad-kids dynamic: what are the ramifications when men’s bathrooms are not equipped with changing tables; and what is the emotional toll on Steinert's little sister when her teacher forces her to make a Mother’s Day craft for a mother she doesn’t have? I craved more of these kernels, ones that have slightly more social resonance than Steinert’s dating life, therapy sessions, and compulsive desire to be an Instagram subject for her ex-boyfriend.

While there is certainly a place for those topics in an autobiographical show, in this case, they undermine the more powerful thematic underpinnings: Steinert’s performance is most poignant and robust when she serves as a conduit to her dads and siblings, and consequently, to anyone with a family that defies what is seen as "normal." Upstream Swimming contains the essence of what could be a profound and affective story, but it’s not quite there yet.