Off Off Broadway, Play
Runs through 8.14.17
Dixon Place, 161A Chrystie Street 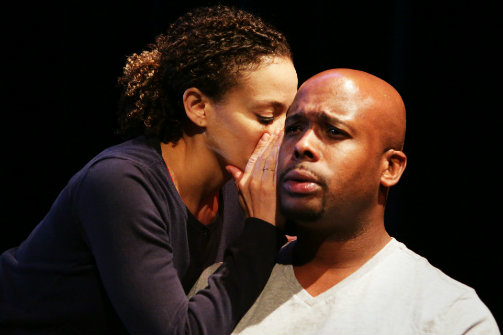 Rebecca Arends and Chesney Snow in The Unwritten Law. Photo by Peter Yesley.

BOTTOM LINE: Beatboxer Chesney Snow tells his rhythm-filled life poem in what would be better off as a solo show.

Last winter, In Transit, the tiny acapella musical that could, failed to turn as many heads on Broadway as its award-winning ensemble might have on their own. For instance, take lauded beatboxer Chesney Snow, who has slammed into Dixon Place with his passionate stage memoir The Unwritten Law. Bearing an almost unnoticeable mix of rage and frustration, Snow recounts the arduous steps his family took around the USA (and all its racism) which preceded his arrival on the Great White Way.

Snow, a tour-de-force with an endless array of sounds he can produce with his mouth alone, pauses his beatboxing to make space for heart-shattering tableaus like his abusive stepfathers, his handicapped friend, and his mother’s near-death experience or almost stillborn child. Yet we never experience an absence of musicality. As Snow weaves this hour-long poem, rhythm, soul and hip-hop are lights at the end of the tunnel in his story of endurance, even if we’re left desiring more beatbox—moments where his talent speaks louder than his words.

This void where beatbox should reign is then opened up to Snow’s colleagues, who turn The Unwritten Law into a multidisciplinary affair, fitting for a narrative where talent is a saving grace. Rebbeca Arends, who also choreographs and directs, embodies Snow’s mother with graceful touches of contemporary dance, while Winston Dynamite Brown (Maleek Washington the rest of the shows) dances as the male figures in his life. A.J. Khaw on the piano and Varuni Tiruchelvam on the cello also share the stage with a versatile score that follows Snow on his memoir.

Even Snow’s thoughts are materialized through Emre Emergil's projections, complemented by R-oz Edelston’s lighting. Slide by slide we are shown words and pictures that pair with Snow’s narrative in a mechanical way that interrupts the fluidity of his mind as proven by his lyrical prowess. This is one example of how The Unwritten Law, like In Transit before it, might not reach greater heights—while the individual parts work wondrously on their own, when thrown together everything gets bogged down. Snow's skills as a beatboxer should make for a powerful and refreshing solo show, even if seeing his colleagues' work is a delight.

Nonetheless, Snow’s hardship should be witnessed, whatever form it takes. The Unwritten Law places into perspective all those family histories that have been lost through injustice. It’s that unwritten law that has taken away one too many black lives, one that seems to unjustly haunt the African American population of this country.

(The Unwritten Law plays at Dixon Place, 161A Chrystie Street, through August 14, 2017. The running time is 1 hour with no intermission. Performances are Sundays at 6:30 and Mondays at 7:30. Tickets are $22 ($25 at the door); $18 for students, seniors and IDNYC-holding patrons, and are available at dixonplace.org.)

The Unwritten Law is by Chesney Snow. Directed and choreographed by Rebecca Arends. Lighting Design is by R-oz Edelston. Visual Design is by Emre Emergil.