By Saviana Stanescu; Directed by Gábor Tompa
Produced by J.U.S.T. Toys Productions and The Romanian Cultural Institute in New York 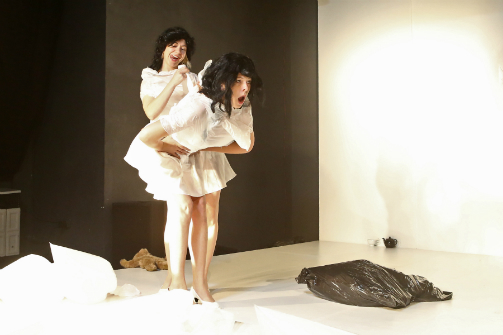 Toys begins in stillness: one woman sprawled asleep in bright blue light with a teddy bear, the other leaning on a wall, wearing a wide-brimmed hat under a warm top light—a noir street-lamp effect. We’re given a long time— 30 seconds? A full minute?—to let this contrast settle in. Then the sleeper gasps awake.

The story that follows must be pieced together from the abstract staging. Clara (Julia Ubrankovics) is an American PhD student, adopted as a young child from Karvystan, a fictional country torn apart by civil war. As part of her PhD thesis on "women in war zones," Clara interviews Shahi (Tunde Skovran), otherwise known as Madonna, a woman of a similar age who was born and fought in Karvystan. As the interviews progress, it's clear Shahi feels an uncommon connection with Clara and imagines they have a shared history. Clara's reaction to this fantasy—or perhaps reality—brings the play to an explosive conclusion, the two women united against the violence of their past.

But this staging of Saviana Stanescu's play—a timely one for a country struggling to empathize with refugees—is less about the story than about recreating a feeling of loneliness and disembodiment. Clara and Shahi have been banished from their own bodies by past trauma, each in her own way. Each longs to bind together a family in a world full of betrayal and violence. An eerie, floating feeling pervades the production: the action takes place on a stark white set, serving as Clara's apartment as well as the unclear setting of the pair's many memories and fantasies.

I would be interested to see a production of Toys that combines Stanescu's poetry and humor with less frenetic movement and fewer splashes of bright colored light. In this staging, directed by Gábor Tompa, some fantasy/memory sequences require a great deal of setup by the cast onstage, while you watch and wait; for such a short show (under an hour), it seems indulgent to direct a single actor to place, say, fifty plastic baby dolls in a checkerboard pattern while the audience watches. However, our patience is rewarded with powerful images that stick with you afterward. Skovran's spastic, spidery presence fills the space and adds a spectacular, weird flare to Stanescu's words; Ubrankovics gives a good performance as the childlike, strained Clara but is often lost in the frenzy of activity onstage. They play off one another like a dragon and a damsel in distress.

As Shahi/Madonna says, "People transform. They can become spiders, lions, panthers...You never know what animal hides inside a person." It is a true pleasure to watch these actors share some of the animals inside them in Toys' unpredictable fantasy world. To connect with the story and zesty dialogue, best to read the play.