They Promised Her the Moon 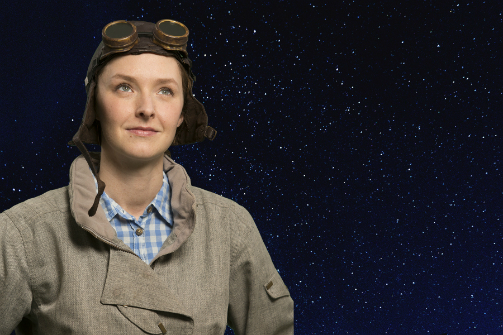 Amanda Quaid in They Promised Her the Moon. Photo by Jeremy Daniel.

BOTTOM LINE: Jerrie Cobb's story and disappointment as a would-be astronaut are brought to life.

They Promised Her the Moon follows the life of would-be astronaut Geraldyn "Jerrie" Cobb from tongue-tied young girl to grizzled Amazonian bush pilot. The play's most compelling aspect is watching innocent Jerrie (Amanda Quaid) first dream of the moon, then grow to understand the world through inevitable betrayal and dashed dreams of space flight, and finally reach womanhood as a pilot who goes her own way. This is also its greatest missed opportunity.

Jerrie's real life story shows she was more of a lion than a lamb: she broke flight distance, altitude, and speed records (one by a harrowing 26 seconds due to mid-flight refueling) and played professional women's softball just so she could buy a plane of her own, all before the age of 21. Those familiar with Jerrie's story would be surprised by the mild-mannered, folksy Oklahoma girl who appears at first in They Promised Her the Moon, who conspires with her doting father (John Leonard Thompson) in opposition to her domineering and hyper-religious mother (Polly McKie). Jerrie's wild victories over cultural norms at such a young age appear in the play, but more as a montage highlighting her grit (and her mother's disdain) than as the earth-shattering victories they were. Her innate drive is also reframed and transformed as a struggle to emulate Jackie Cochran, the famous World War II-era pilot (Andrus Nichols).

Nichols's steely Jackie seems an unlikely mentor for the earnest Jerrie from their very first meeting. A twelve-year-old Jerrie approaches the celebrity Jackie starry-eyed, and Jackie gives an alarming list of the things Jerrie must do and be to succeed as a pilot—among them, not to forget who betrays her. Jackie's complicated support of adult Jerrie, and a later betrayal of her own cast her as the villain of the drama. Lines like, "I just don't like you," tossed almost breezily at Jerrie, turn a pivotal moment in the script into a "catfight" (drawing gasps from the audience). Finding a more complex dynamic between Jackie and Jerrie, to better humanize both, may be an issue of better balancing personal power and agency in the script: with Jerrie so "Snow White," it doesn't take much to make Jackie a witch.

As a woman named after an airplane brand (and tickled to see Jerrie begin her professional pilot career in a Piper Cub), it's been my privilege to spend a lot of time with a somewhat-dwindling Midwestern community of mostly-elderly, mostly-male flight devotees. The mad joy that self-made pilots feel in easing up a spindly sport plane, to "touch the face of God," as in an old poem, isn't as fully-expressed in this production as I might have hoped, though Amanda Quaid's Jerrie has it at moments; Jerrie's father also has a bit of that glint.

This is a timely and well-designed production. Still, I wanted to see more nuance in what motivated the central characters to risk everything for flight, and in Jackie and Jerrie's relationship, so central and yet so disappointingly fleshed out in this piece. Perhaps if Jackie and Jerrie had been able to share some expression of what flight meant to them in less metaphorical terms (freedom for Jerrie, and conquest for Jackie), the play might be better able to show the sparks that must have flown between these two powerful women and their dreams.

(They Promised Her the Moon plays at Theatre at St. Clement’s, 423 West 46th Street, through May 27, 2017. The running time is one hour and 30 minutes with no intermission. Performances are Mondays and Wednesdays at 7; Thursdays, Fridays, and Saturdays at 8; and Sundays at 3 and 7. Tickets are $35 and are available at mirandatheatrecompany.com or by calling 212-279-4200.)

They Promised Her the Moon is by Laurel Ollstein. Directed by Valentina Fratti. Dramaturgical Consultant is Alice Kae Koger. Scenic and Lighting Design is by Graham Kindred. Costume Design is by Tristan Raines. Sound Design is by Margaret Montagna. Choreography is by Jennifer Harmon. Fight Direction is by Dan Renkin. Production Stage Manager is Ernie Fimbres.