By The Department of Fools 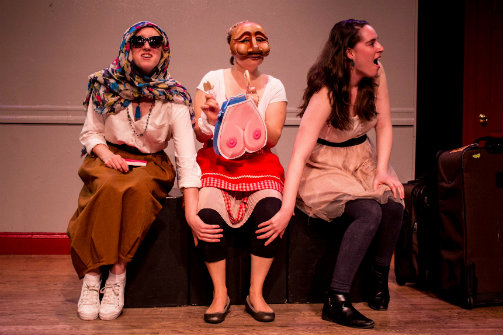 BOTTOM LINE: In this newest piece by The Department of Fools, eight commedia masters weave together song, dance, comedy, and phalluses of all sizes!

The Department of Fools is back at the Peoples Improv Theater with their newest piece The Tooth-Puller. They promise a nasty, raunchy, madcap comedy dash, and that’s what they deliver. Nearly a year after the Presidential election, seeing this show is an innocuous way to revisit the boundaries of political correctness. It’s offensive and smutty, but somehow the masks (by Jonathan Becker) and this cast’s unapologetic performances make it all fine to laugh at.

The Tooth-Puller is more plot-based than the Fools' last show at the PIT (A History of Servitude). What has not changed is the cast’s mastery of the centuries-old form of comedy that is commedia dell’arte, a style that does not feel at all dated when these fools are in charge. As they like to remind their audiences, “we have no script,” just a few original scenarios in which they improvise interactions, with each other and audience alike.

The story begins when Orazia (Rotem Weiner), daughter of Pantalone (Yair Ben-Dor), is shipping off to college, leaving behind her lover Isabella (Sylvie Mae Baldwin). In typical dirty-old-man fashion, Pantalone also has eyes for the young Isabella, but his servant Colombina (the effervescent Anna Tempte) tries to convince him that his daughter deserves to be with the woman she loves. Pantalone will not stand for those who oppose him. In a fit of anger, he bites Colombia, who then reveals directly to the audience that she will avenge herself by having the old man’s teeth pulled. So begins the topsy-turvy unfolding of Colombina’s plan, which involves a smell-o-meter, an Eye of the Tiger workout montage, some disturbing thoughts about the Tooth Fairy's breasts, a handful of well-placed genital jokes, and a generous dose of drugs ex machina (forgive the pun, blame the Fools).

A particularly standout bit is the tooth-pulling itself, performed by the captivating Ben-Dor as Pantalone and Andy Richardson as Arlecchino. Richardson's mystifying talent of song, dance and bendiness brings a whole new dimension to the piece as a whole.

John Hodgman, the actor known for portraying the Deranged Millionaire and the Resident Expert on The Daily Show, recently commented that he had reached a point with his characters where he couldn’t compete with the real political figures on the news. Though comedy is certainly granted access to the extreme and absurd, there are certainly moments and characters in The Tooth-Puller that just feel unfunny. Through no fault of their own, the company is confronted with a news cycle polluted with characters grosser than Pantalone and more arrogant than Capitano, resulting at times in an audience who has lost the will to laugh and instead sigh and wince at how reality has somehow eclipsed farce.

The Department of Fools have truly merited this run at the PIT as they are fantastic improvisers. It’s the kind of show you want to see twice because of how much must change from one night to the next. This kind of audience participation is not for the faint of heart—you may be, say, unwillingly cast in a mother-daughter fantasy for pervy Pantalone. I really appreciate how no plotline or rehearsed bit is too precious for these folks; their goal is to make you laugh. And in this, they are crafty, mischievous, and simply fun to watch.

The Tooth-Puller is by The Department of Fools.