This show has closed. For more information visit ps122.com. 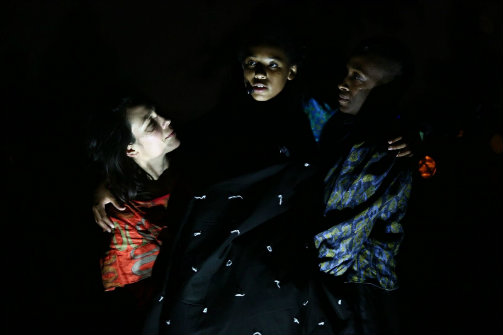 Emily Johnson, Georgia Lucas, and Tania Isaac in Then a Cunning Voice and a Night We Spend Gazing at Stars.
Photo by Paula Court.

BOTTOM LINE: An overnight amalgamation of performances and activities organized around indigenous traditions and dreams for the future.

This performance was conceived by award-winning choreographer Emily Johnson, who is of Yup’ik descent, in conjunction with her company, Catalyst. In her artist statement, Johnson details how the experience is intended to entail a joining together to imagine future possibilities, with a special emphasis on honoring Native American voices. In the one-night-only New York iteration of the event, the question “What do you want for your well-being, friends, city, neighborhood, family?” was posted on signs around the performance site in Randall’s Island Park—a city-run public park on an island in the East River, which is part of the traditional homeland of the Lenape people.

After gathering at the designated meeting area, where there was a brief opening circle and sage smudging, we were led on a silent, extended walk through the park. We eventually arrived at a lawn next to the water, where we found a collection of quilts made at sewing bees across the world, under the direction of textile artist Maggie Thompson. They were unraveled to reveal intricate patchworks of various answers to the grand question proposed by the evening. Later on, 12-year-old Georgia Lucas and her siblings endearingly led a few audience members in adding to the quilts.

As it got darker, Johnson, along with Tania Isaac and others, danced, spoke, and sang, illuminated by innovative body-based lighting (Lenore Doxsee). The movement was often simple and repetitive, in other moments animalistic and fierce; the words circled around motifs of identity and naming, family and matrilineage, and anger and violence. The action was punctuated by three elaborate meals based on indigenous recipes and food system practices, designed by food artist Jen Rae and executed with the help of numerous volunteers from the audience and otherwise. Highlights included maple lemon myrtle caramel corn that tasted oddly like Froot Loops, chili from a recipe provided by the Iroquois White Corn Project, and numerous vegetables from Randall's Island Urban Farm. Audience members provided and washed our own dishes, which both reduced waste and resulted in a camping-in-the-woods feeling.

At around 12:30 am, Johnson led the audience in a grounding meditation, and then we were sent to three “fires” (only one was an actual fire) to hear indigenous creation and ghost stories (Muriel Miguel), discuss the meditation exercise (Johnson), and learn about the post-colonization history of the island (Eric Peterson). Later, there was another discussion about how to be “good guests” on Lenape land. Those of us who were still awake then wrote “letters to the future” and arranged ourselves in the shapes of constellations to read them aloud. As dawn approached, Lynn Bechtold began a violin performance, soon accompanied in dance by Johnson and Isaac. After breakfast was served, the audience slowly began to disperse.

The massive scope, idealistic intentions, and singularity of this piece are inspiring. Most of its individual elements were compelling, and there were some truly gorgeous moments: a walk through the arches of the ironically named Hell Gate Pathway, the juxtaposition of a line of people sewing by the light of headlamps with a passing ship, and the violin-playing and dancing at dawn. The integration of the performance with the surrounding environment was its greatest delight: nearby music and even car alarms played off of the movement in interesting ways. At times, the experience gave the impression, by existing alongside ordinary sights and sounds, that the environment itself was a performance. Johnson’s grounding meditation, and poetry by Karyn Recollet, also stood out as profound. Perhaps most crucially, the focus of Then a Cunning Voice... on amplifying the perspectives, traditions, and inherent value of indigenous people is refreshing, and stands as an example of how to do cultural appreciation instead of cultural appropriation.

However, the presence of people and traditions from many indigenous nations also leaves the door wide open for audience members to conflate various cultures and romanticize indigenousness, as when several participants made comments that falsely equated environmentalism with respecting indigenous people. The frequent celebration of women, especially grandmothers, throughout the event also occasionally bordered on reductive. The performance took great care to acknowledge that it took place on the Lenape homeland, and promised to "pay respect to Lenape peoples and ancestors past, present, and future." Yet aside from a brief appearance by some Lenape folks during the opening ceremony, we did not learn anything about Lenape culture or the history of the land prior to its invasion by the Dutch. While all Native American cultures are valuable, it would have made more sense to center the people on whose land we were gathered.

There were other ways in which the experience did not match up to the potential of Johnson's vision. While there were loose thematic associations between the show's elements, they did not build on each other and often did not seem to go together at all, sometimes giving the impression of a variety show. Several speeches about sexual assault and a man in drag (Grey McMurray) scream-singing a very long folk song about a nobleman getting hung seemed especially misplaced.

Disorganization, while perhaps not surprising for such an epic, one-off happening like this, also took its toll. Activities did not always match those listed in the program, materials were in the wrong place at the wrong time, there were frequent technical difficulties, and activity leaders openly expressed uncertainty about what they were supposed to be doing. And then an hour before the scheduled ending time, the piece simply dissolved. Though this was likely meant to underscore that “There is no end to the work we begin here,” it contributed to the overall feeling of aimlessness.

The performance not only suffered from the chaos that comes from trying to do too much at once, but also from a lack of connection. Who we were, and what were we doing on this land with each other was not explicit in the experience itself. Johnson’s statement says “I want to welcome you…It is celebratory, to come together like this.” Yet there was no magic circle, no temporary imagined community, and no activities that enabled the audience to get to know each other or the performers in any meaningful way.

Unfortunately, our interactions felt shallow. For example, Johnson asked audience members to kiss various parts of her body, prompting a cringe-worthy moment in which an older man pronounced that he “would love to” kiss her neck. This kind of exercise only imitates the genuine intimacy that can exist between performers and audience. It is harder to meet an audience’s needs when a show is so long and complex, yet creating and holding space is also a basic requirement of a performance. Outside of a traditional venue, this kind of metaphorical space is even more important, and the lack of it here was conspicuous.

Despite the title of Then a Cunning Voice and a Night We Spend Gazing at Stars, there were few stars visible during the night—it was hazy, and with so much going on, there wasn’t a lot of time to look up. Similarly, the celestial vision of Emily Johnson did not come through clearly.

Then a Cunning Voice and a Night We Spend Gazing at Stars is choreographed by Emily Johnson. Directed by Ain Gordon. Lighting Design is by Lenore Doxsee. Textile design is by Maggie Thompson. Food Design is by Jen Rae. Stage Manager is Matt Evans. Recorded Sound and Story Contributors are James Everest, Julia Bither, and Margot Bassett. Protocols by Sm Łoodm ’Nüüsm- Mique’l Dangeli.