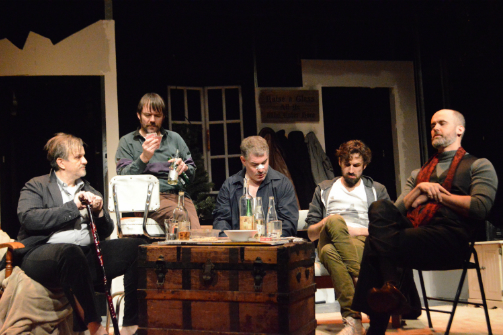 BOTTOM LINE: A revival of Conor McPherson’s Tony-nominated play, in which secrets from the past carry debilitating weight and haunt like an invisible wound.

In Conor McPherson’s intricately plotted tale of familial relations, regrets, and ever-diminishing hope, James "Sharky" Harkin (Eric Morace), a laid-off chauffeur, spends Christmas at home in the suburbs of Dublin with his recently blinded brother Richard (Daniel O’Shea). In their small home in Baldoyle, the two brothers, along with their friends Ivan (Mac Brydon) and Nicky (Dana Hoffburton), gather on Christmas day. Whiskey and beer start to flow, and a game of ostensibly harmless poker is laid out on the table. Tagging along with Nicky is a Mr. Lockhart (Sean Folster), a sharply dressed, mysterious, yet oddly familiar stranger whom both Sharkey and Ivan seem to somehow recognize—a face from another lifetime, a blast from the past, so to speak.

McPherson’s kitchen-sink naturalism and Irish working-class language morph seamlessly into magical realism and heightened poetry as Mr. Lockhart reveals himself as the devil, come to reclaim Sharkey’s soul for an overdue debt on a deal they had made long ago. Folster’s Mr. Lockhart is cunning; his menacing and knowing glances give him a diabolical charm, contrasting well with Morace’s submissive "lion in hibernation" persona. Between dealing with his own ill fate, and being his brother's caretaker as well as emotional punching bag, Morace’s Sharky more or less channels an Irish Gilbert Grape. The dynamics between Morace and O’Shea’s Richard are spectacular to behold: the apparent resentment between them as a result of past misfortunes, as well as their obvious, unbreakable brotherly bond, demonstrates a kind of love that’s not to be described by words.

The story unfolds with unexpected twists and turns. The troupe of actors keeps the audience on the rim of their seats under the direction of James Rees. Eddis Brown creates a beautiful set, specific down to the smallest details, that transports spectators into a slightly dilapidated Dublin house. Brown's lighting, equally impressive, depicts the progression of time with the nuanced color changes through the windows.

The masterfully written script and committed actors make Midcity Productions’ The Seafarer noteworthy. A lingering issue might be the overly exaggerated exchanges, which might be off-putting for those expecting to observe a family affair unfold naturally, where characters wouldn't need to dramatize their speeches. But it’s a production that’s faithful to McPherson's script, and brings to life the complex characters that the playwright created.

(The Seafarer plays at the 13th Street Rep Theatre, 50 West 13th Street, through March 5, 2017. Running time is two hours with an intermission. Performances are Wednesdays through Saturdays at 8, and Sundays at 2:30. Tickets are $18 and are available at midcityproductions.org.)