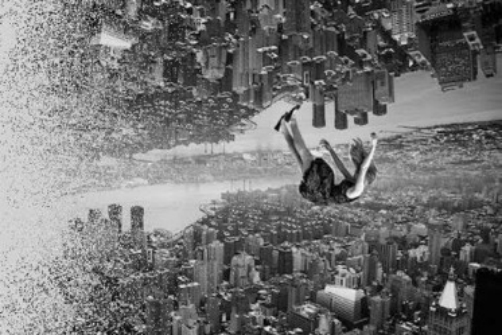 Sub-Basement by Tom Block at IRT

BOTTOM LINE: Sub-Basement is a quirky, comedic odyssey that expands from the streets of New York to the inner workings of its characters’ minds.

Sub-Basement, name notwithstanding, transports its audience to a liminal space somewhere between the cold concrete of New York City and the underlying consciousness of its inhabitants. From an answering machine message announcing the play’s first movement, to a sub-basement beneath the much cherished Drama Book Shop, this spirited piece moves to an arrhythmic but consistent beat through the expanding matrix of our aspirations and doubts.

Adrienne (Veronique Ory) is a young woman poised to commit herself to a life of comical structure as a member of the Royal Canadian Mounted Police, fulfilling the wishes of her Mounty father. As a final goodbye to a life of poetry, she’s decided to go meet a young law student, Simon (Patrick Dooley) in New York City. Before long, she's found herself following a series of detours all woven together by the lugubrious Gustav (Zenon Zeleniuch) and his Socratic sounding board, Arnaud (Barry Phillips). The two homeless men seek to “help” her, Gustav in particular claiming to be the dramaturg of her life. As the story unfolds we get glimpses into Adrienne’s previous life, Simon’s true intentions, and some sweeping dialogues shared by Arnaud and Gustav.

Sub-Basement is great for anyone looking for something a little less linear and a lot more off-beat than the more common theatrical fare. Tom Block engages with some lofty themes and mind-bending questions in this comedic epic set in a slightly more surreal version of today’s New York City. The play pulls no punches in its overt theatricality. Needless to say, it may not be for those craving some Annie Baker naturalism, or even a slightly more charged family drama. Sub-Basement, again name notwithstanding, exists on a plane of heightened behavior where the homeless begin to resemble guardian angels, the heroes are able to say exactly how they feel at all times, and the audience is lifted to a vantage point where the lines between good and evil, right and wrong, law and poetry, are clearly delineated and then erased.

The cast is immensely talented. Veronique Ory carries the play successfully in the lead role, bringing the requisite humanity to a role that is communicated in the script mostly through poetry. Patrick Dooley plays an imminently likeable Simon, the slightly sinister but straitlaced lawyer. Phillips’ irreverence as Arnaud toward Zeleniuch’s Gustav creates a charming dynamic throughout the show, as both of the actors have done the requisite work to bring these sphinxian characters to life.

All of the aspects of director Hunter Bird’s production come together nicely. Jonathan Cottle’s scenic design elegantly brings us into locales both here in the city and within our characters’ minds, and is especially striking when accompanied with Ross Graham’s laser-sharp lighting design, and Antonio Consuegra's savvy costuming. The sound design and original music composition were enacted beautifully by Patrick Lachance, and all of these moving parts were brought seamlessly together by Kateryna Turkalo’s stage management and Skylar Fox’s technical direction.

Athena Theatre Company’s production has brought together a strong creative team to put up a challenging but worthwhile script. Given the nature of the play and its movement in fits and starts, the level of professional production is a boon. Sub-Basement is a play that will not only make you think, but give you something beautiful to see as you do. It is, among many other things, an intriguing step into the surreal.

(Sub-Basement plays at IRT, 154 Christopher Street, through April 14, 2017. The running time is 90 minutes with no intermission. Performances are Thursdays at 8; Fridays at 8; Saturdays at 8; and Sundays at 3. Tickets are $25 and are available at brownpapertickets.com. For more information visit irttheater.org.)

Sub-Basement is by Tom Block. Directed by Hunter Bird. Set Design is by Jonathan Cottle. Lighting Design is by Ross Graham. Sound Design and Original Composition is by Patrick Lachance. Stage Manager is Kateryna Turkalo.