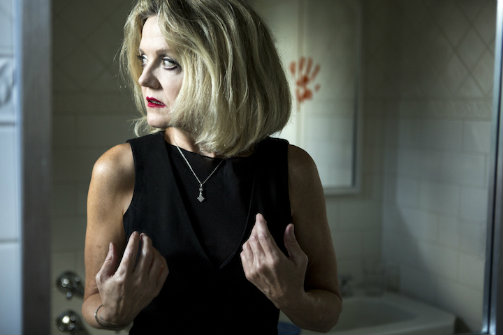 BOTTOM LINE:  A horror-laced monologue about the aftermath of a suicide that will likely twist your innards and disturb your sleep.

Sharon, an Upper West Side psychotherapist (played by two-time Tony nominee Alison Fraser) has been off her anti-anxiety medication for five months when she learns that her only nephew, 24-year-old Eddie, has committed suicide. She’s shocked—the last time she saw Eddie he looked fit, had a job, and lived with a girlfriend who seemingly made him happy. How could she have missed his despair? As Sharon looks back on that last visit, she does what has to be done—book a flight to Texas and cancel patient appointments. So far this probably sounds relatively ho-hum, but rest assured there will be unexpected twists, turns, and bumps as the story unfolds.

After arriving in Lubbock, Sharon meets Cara, Eddie’s girlfriend, a beautiful, almost waif-like, young woman. Cara (who the audience hears about but never sees) immediately sidles up to Sharon. The two quickly form a bond—there is nothing like tragedy to cement a connection—and Cara introduces “Aunt Sharon” to the tight-knit community she belongs to, one that Eddie cherished. I don’t want to reveal too much, so let me just say this community engages in behavior that will likely shock (and even gross out) those whose tastes tend toward the vanilla, chocolate, and strawberry. It’s kink, and then some, but Sharon takes to it like a preschooler to finger paints, in short order becoming an earnest disciple.

Still, she has to return to New York—to her home and lucrative private practice. Suffice it to say, she’s a mess, eager to find a local group that shares her newfound fetish while simultaneously grieving over Eddie’s death and battling unremitting anxiety. Flashbacks of her mother’s suicide further add to her disquiet. As you might expect, these factors send Sharon into total panic. She knows she is unraveling and in need of sedation. But what to do? Unable to formulate a better plan, she shows up unannounced at her former psychiatrist’s home. Even though it’s 5 AM, the doctor lets her in and encourages her to talk it out.

And that’s the play—for 100 straight minutes Sharon talks nonstop, reflecting, parsing, digressing, and describing her psychological turmoil. The set—an innocuous black chair next to an end table and lamp—forces all eyes to rest on Sharon. For her part, Fraser is masterful at presenting the character as both contemptible and sympathetic. That said, despite the title, Squeamish is not for the squeamish; some of the sexual predilections and social encounters will likely turn many a stomach. It’s theater at its most provocative. Consider yourself warned.

(Squeamish plays at Theatre Row's Beckett Theatre, 410 West 42nd Street, through November 11, 2017. The running time is 100 minutes with no intermission. Performances are Mondays and Tuesdays at 7; Wednesdays through Saturdays at 8; Tickets are $52.25 and are available at telecharge.com or by calling 212-239-6200. For more information visit afo.nyc.)

The cast is Alison Fraser.