Someone Dies at the End 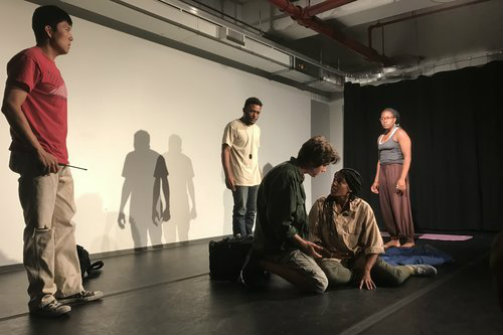 The cast of Someone Dies at the End in rehearsal.

BOTTOM LINE: A drama set in a post-apocalyptic landscape crafted by a close-knit collective of diverse actors.

In a theatrical ecosystem where artistic roles are becoming increasingly siloed, it is heartening to see a group of young artists banding together to create new work. In this spirit, a company of performers fresh from Columbia University’s Acting MFA program formed Squeeky Wheelz Productions in order to create collaborative work that celebrates “the diverse cultures of our country through theatre.” It’s an ambitious mission for this fledgling pan-American collective, whose first production Someone Dies at the End debuted this month at 59E59, ahead of its run at the Edinburgh Fringe.

In line with its portentous title, Someone Dies at the End is an hour-long post-apocalyptic drama written by two of the collective’s members, Matt Consalvo and Freddie Fulton. Much like the company itself, the play centers on a group of young people thrown together by circumstance. At the play’s opening, we’re introduced to three characters denoted only by “where they’re from”— Denver (Fang Du), Wichita (Amy Miyako Williams), and ‘Bama (Freddie Fulton). After an ambiguous cataclysmic event, the three have holed up in a tunnel, surviving on a meager diet of canned beans and a nearby stream of "safe" water. The sobering performances of Du, Fulton, and Williams quickly acquaint us with the perils of this post-radiation world, as well as the trio’s attempts to suppress an intramural power struggle.

As the play progresses, the fittingly claustrophobic upstairs space at 59E59 is invaded by other wandering stragglers seeking shelter from the hellish landscape beyond. What follows is a fairly straightforward character study, with disputes erupting, alliances forming, and romances blossoming. We’re steadily introduced to each of the characters, their lingering attachments to the outside world, and their lives before “the drop.” The first set of intruders, NYC and Philly (the heartwarming Justin Michael Cooke and Alinca Hamilton), are revealed to be a couple. The second pair are brother and sister, with Eddie Powers' possessive Orlando proving the counterpart to Leah Bezozo’s shell-shocked Tampa.

While the action of the play doesn’t exactly innovate on the post-apocalyptic genre, a surprising third-act twist will leave audience members what they've seen. To their credit, Consalvo and Fulton have crafted an even-handed vehicle for the company's performers (the play is double cast on alternate nights to accommodate the rest of the collective). Squeaky Wheelz' rigorously democratic collaboration—as co-directors, designers, and producers of this endeavor—produces a hyperreal ensemble performance. As such, the acting is really the focus, with the set, sound, and lighting design being comparatively sparse.

Ultimately, Someone Dies at the End tries to pose the question of what truly defines us in times of struggle. Is it our relationships? Is it where we’re from? Is it our ideologies? While the one-act leaves many of these questions unanswered, as the play’s title suggests, Someone Dies at the End suggests that the human propensity towards violence—while seemingly inevitable—can sometimes manifest itself in surprising ways.

(Someone Dies at the End played at 59E59 Theaters, 59 East 59th Street, through July 30, 2017. The running time was 1 hour without an intermission. Tickets were $15. It will run in August 2017 at the Edinburgh Fringe Festival. Visit squeakywheelzproductions.com for more information.)

Someone Dies at the End is by Freddie Fulton and Matt Consalvo. Directed by Squeeky Wheelz Ensemble.