Sienna’s Mantram, or (a change of pace at China Lake) 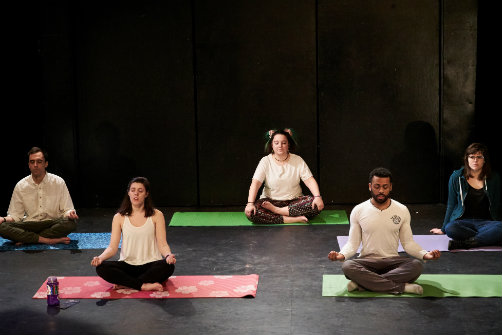 Sienna’s Mantram sheds light on a little-known factoid: if a Westerner isn’t obsessing over yoga, they’re obsessing about alien conspiracies. When five individuals attend a mediation retreat near China Lake in the Mojave Desert, some things are not as they seem. These suspicious people are determined to find answers—within themselves as they meditate, or directly from the desert grounds itself.

In an effort to save their marriage, Ingrid (Stefanie Flamm) and Charlie (playwright Zach Stephens) have come from the San Fernando Valley (that section of LA where Valley Girls are from) to the Joyful Path retreat. Charlie is very nervous about the danger of the grounds, and Stephens infuses his character with charming neuroses. They meet Darcy (the infectious Amanda Barlow) who came to Joyful Path not only for some yoga and meditation, but to find the secrets of the Mojave. Instead of meditating, Darcy uses her time to seek answers about nearby extra terrestrial life.

Barlow delivers an enrapturing monologue about tailing a strange Winnebago RV when she’s supposed to be back on the retreat grounds. Darcy is the anchor into the elucidation of the Joyful Path’s secrets, gently teaching Ingrid and Charlie that they have bitten off more than they can chew. I found it odd that Ingrid and Charlie would not know the retreat’s dirty secrets before their arrival. But that’s the joy of this play: the melodramatic innocence of its characters lets me buy that they are open to adventure.

In the next room, a similar setup is unfolding. Gabriel (a very talented James Arthur) came to the retreat to mourn a breakup. Unlike Ingrid and Charlie, he is determined to not sway from his meditation intentions, blocking out the odd information unfolding around him. Unfortunately for him, his roommate Maude (Elizabeth P. Taylor) is a paranoid whistleblower on a cover-up of domestic nuclear activity and she’s having a hard time with his intense affinity for yoga and bettering himself.

The five finally meet in a meditation session that’s interrupted by loud, violent sounds, and then by a power outage. During the outage, they are confronted by the fact that they are actually the only ones on the grounds, and soon put two and two together to discover what's really happening at Joyful Path.

I’m impressed by Stephens’ ability to write a funny, freaky look at the neuroses and suspicions of people who trek out to the Mojave to meditate. The entire cast is wonderfully neurotic and charming, and it is easy to love the innocent belief of each of the characters. Stephens' detailed research into the lives of conspiracy theorists pays off in his writing of Darcy and Maude, and their quest for proof is met with great balance in the others' quest for inner truth.

While I’m sure Stephens meant to paint a picture of quirky individuals who didn’t need much in the way of introduction, I was constantly curious about the lives of the people brought together in the desert. This curiosity spiked during the climactic moment when the power went out—the characters come to terms with the truth so quickly that it feels a little Scooby Doo-ish, like detectives cracking the case before reaching the man behind the curtain. I would have liked a bit more of an unveiling, but the short running time of a Frigid Festival show might not allow for that. Perhaps a longer version would, and I hope there’s life for this wacky show after this festival.

Sienna's Mantram or (a change of pace at China Lake) is by Zach Stephens. Directed by Kelly Webb. Sound Design is by August Belfiglio. Lighting Design is by Charlotte Seelig.