Shit, I'm in Love With You Again

Off Off Broadway, Musical
Runs through 9.30.17
Soho Playhouse, 15 Vandam Street 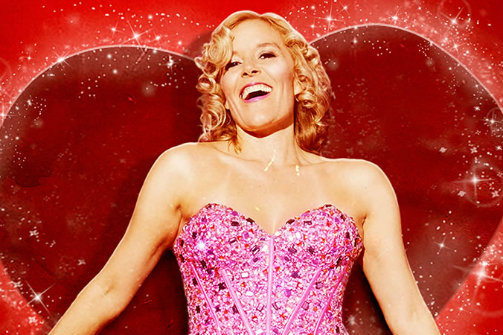 Rachelle Elie in Shit, I'm in Love With You Again.

I don't know about you, but it just doesn't feel like August in New York City without the Fringe Festival. Its absence this year left me off-kilter, having gone "fringing" every August for the past fifteen years or so (even Minneapolis, where I grew up, has an annual fringe festival). Thankfully, the Fringe Encore series arrived this fall to somewhat sate my hunger for Fringe Festival offerings.

Shit, I'm in Love With You Again is a good option to fill the void. It has all of the qualities you would expect to see in a Fringe show: bawdy humor, zany musical numbers, and a charming performer who is all too willing to serve up the most embarrassing details of her sexual history onstage. Rachelle Elie begins by sharing the details of her early life with a strict Catholic father and a free-spirited mother who divorced Rachel's dad to seek out sexual fulfillment by dating men half her age. Elie makes it through her undergraduate career a virgin and moves to Toronto for a master's program, where she feels compelled to make up for lost time and build a sexual history more akin to those of her peers. There she meets many less-than-desirable suitors, including a pony-tailed philosopher who won't stop talking and another who lives in a van with two dogs (and convinces her to have sex in it). Finally, Elie finds romantic (and sexual) fulfillment with a medical student, nicknamed "The Voice" due to his sexy phone voice. While the two spend many blissful years together, their relationship falters as they raise two children and Elie has to make sacrifices to help him pursue his career. The rest of the show concerns the couple finding their way back into being in love with one another.

Of course, the musical numbers are not entirely polished and streamlined, and Elie will certainly not be singing with the Metropolitan Opera anytime soon, but this is half the fun of the Fringe Festival, and to criticize her for this would be to entirely miss the charm of the Fringe. Its performers so love their craft that they are willing to travel to another country on a shoestring budget while performing on a basement stage. The sheer joy Elie has for performing makes her a joy to watch, and she manages to capture the humor in relationship dysfunction with perfect authenticity. The married members in the audience nodded and chimed in during her performance, showing how much her story resonated with theirs. I hope Elie returns to New York City soon, perhaps with another hilarious one-woman show.

(Shit, I'm in Love With You Again played at Soho Playhouse, Huron Club, at 15 Vandam Street, through September 30, 2016. The running time was one hour with no intermission. Tickets to the Fringe Encore Series are $20-$24 and are available at sohoplayhouse.com. For more information visit crowningmonkey.com.)