Seven Spots on the Sun

By Martín Zimmerman; Directed by Weyni Mengesha
Produced by The Sol Project 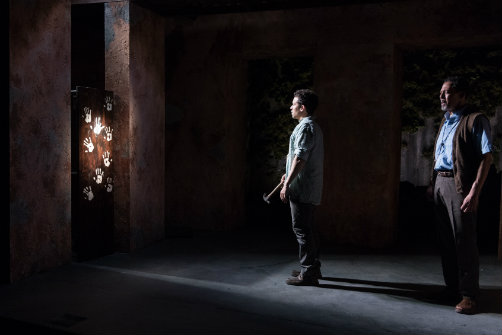 Rey Lucas and Peter Jay Fernandez in Seven Spots on the Sun. Photo by Russ Rowland.

BOTTOM LINE: A twisty-turn-y wartime drama with beautiful performances that leaves a lot to be desired.

Thanks to my quiet American upbringing, war is an obscure concept for me. I’m very lucky—it’s not that way for many areas of the world riddled with strife and violence. Argentine playwright Martín Zimmerman’s Seven Spots on the Sun paints a clear picture of the chaos and sacrifices of war, and the fallout of hope that individuals experience regularly in wartime. The heart of this play is not war itself; according to the program note, Zimmerman set this play in a nameless area of Latin America to expose the core of war’s strife and individual stories of pain or supposed victory. Yet while Seven Spots on the Sun is beautiful in language, it is hampered by underwritten characters and unnecessary detours from the main story.

Set in the fictional town of San Isidro, Seven Spots on the Sun features couples on both sides of a conflict. Luis (Sean Carvajal) and Mónica (Flor De Liz Perez) struggle to make ends meet, so Luis joins the infantry, and Mönica waits for his periodic visits home. Meanwhile Moisés (sweetly played by Rey Lucas) and his wife Belén (Flora Diaz) run a hospital for those maimed at the hands of the infantry. Where Moisés is soft and kind to his brethren, Luis is stubborn and intense. And Mónica bears the brunt of Luis’ misgivings, often physically (strangely, although this war has wounded many, she is the only one bearing a physical bruise). When Moisés discovers his miraculous gift of healing the sick, he learns the secrets of the war’s misgivings. Magical healing can change everyone, even in a society that can withstand both miracles and tragedies.

But this magical miracle is too little too late, both for the characters waiting for a miracle, and in terms of the play's structure. Zimmerman messes with linear storytelling—Seven Spots tells its story in long-form flashbacks that come to a head at the end. Although I love an odd timeline, this unconventional story arc doesn't seem to do its subject any favors. When we meet Moisés, he is smashing up a radio—a symbol of the end of the war. Working back into the height of the war, we learn about his hospital for the wounded, and then later, his miraculous gift of healing. Due to the jumping timeline, it is difficult to get a sense of the hierarchy of good and evil that Zimmerman wants to dismantle.

Part of the problem is that Moisés discovers his special talent for healing earlier in time, but later in the play; had this occurred nearer the beginning, it might better inform how we view this character. As it is, we are left with many questions—is Moisés a saint, or is he the devil, out to curse men who have done wrong? Zimmerman may or may not have an answer, but either way, Moisés’ gift feels somewhat superfluous: as the only doctor in San Isidro, he is loved by many and the town relies on his services. Moisés already has a gift of healing; as beautiful as his miracle is, it is merely symbolic of his already existing abilities.

Although many of the characters are underwritten, the actors all give exceptional performances, and make good use of the rich language that Zimmerman employs. This language is purposefully reminiscent of the giants of Latin American magical realism, like Gabriel Garcia Marquez and Isabelle Allende. Given that much of the significance of magical realism is as an artistic response to political strife, I’m glad to hear this language here. However, and this isn’t Zimmerman’s fault, magical realism can be difficult to make work onstage, and at times the language here is too purple.

Rattlestick's is a tiny stage; while I love seeing it transformed into huge landscapes (by Arnulfo Maldonado), Weyni Mengesha’s staging gets a bit cramped, and is all the more complicated by the timeline. While Mengesha’s direction is at times seamless—in the scenes featuring each couple, and in aligning the folktale aspects of magical realism with the characters who embody that reality—the heart of this piece is the acting, especially the performances of the two couples. Sol Project is doing incredible things for Latinx stories. Even though I’m rather lukewarm about Seven Spots on the Sun, I’m excited for the initiative's future and it's mission to bring Latinx stories to the forefront of American theatre.

(Seven Spots on the Sun plays at Rattlestick Playwrights Theater, 224 Waverly Place, through June 4, 2017. The running time is 80 minutes without an intermission. Performances are Mondays, Wednesdays, Thursdays, and Fridays at 8; Saturdays at 3 and 8; and Sundays at 3. Tickets are $51 ($26 artists, $16 students) and are available at rattlestick.org or by calling 866-811-4111.)

Seven Spots on the Sun is by Martín Zimmerman. Directed by Weyni Mengesha. Set Design is by Arnulfo Maldonado. Lighting Design is by Amith Chandrashaker. Sound Design is by Tei Blow. Stage Manager is Nicole Marconi.