Sam & Dede, or My Dinner with
André the Giant

By Gino Dilorio; Directed by Leah S. Abrams
Produced by The Custom Made Theatre Company 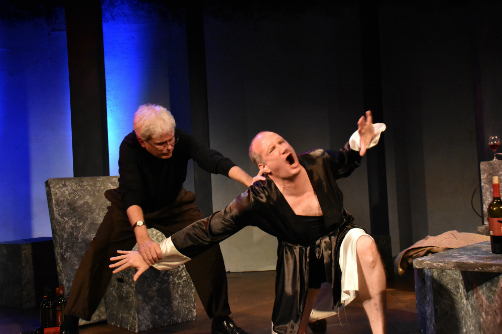 Dave Sikula and Brendan Averett in Sam & Dede, or My Dinner with André the Giant. Photo by Jay Yamada

BOTTOM LINE: In form and function, a tribute to titans.

In 1958, 12-year-old André René Roussimoff (who would later be known as André the Giant) was already too big to ride the school bus—he stood over six feet tall and weighed more than two hundred pounds. With no way to get to class, a kind neighbor who happened to owe his father a favor offered to drive him to school in his truck. That neighbor was acclaimed author and playwright Samuel Beckett. Apparently, they mostly talked about cricket. It sounds too absurd to be true, except that it really happened. In Sam & Dede, or My Dinner with André the Giant, playwright Gino Dilorio imagines what else they might have discussed, and the strange friendship their conversations could have fostered.

The whole play is really an adoring memento to the two giants—one literal, the other literary—it portrays. It chronicles some of their greatest achievements and, in true Beckett fashion, puts them in a room together at a few different points in their lives to ask questions with no certain answers. It's littered with references to works by both men, references that both celebrate and satirize, as when Sam is unable to answer any questions about the content or meaning behind Waiting for Godot. It's hard to tell if anything actually "happens" per se, but that's okay, because they make time to talk about that too. Director Leah S. Abrams really succeeds in bringing the playful banter to life, so watching the two crammed in a pickup truck cab or sitting at a table is always energetic, and only serves to amplify the mimicry of Beckett's style at work.

It's entertaining to watch the actors play their parts. Dave Sikula and Brendan Averett (Sam and André, respectively) have great chemistry and the rapport they build throughout the play is kind of cute. They're just such a charming pair, not least because it seems so unlikely that they would have anything in common, and really, they don't. Yet in spite of all their differences, their exchanges remain endearing, even when they seem to go years without seeing one another.

The design work is also worth mentioning. The set (by Erik Ladue, adapted by Tara Higgins) is assembled and re-assembled out of various shapes and sizes of blocks which clearly and immediately form the different settings of the play, while lights (Maxx Kruzunski) and sound (Ryan Lee Short) serve to speed the passage of time through the decades. The whole aesthetic is simultaneously disparate, yet complete.

Sam & Dede, or My Dinner with André the Giant is a pretty simple play. There's a lot of humor and love in it, and little else. It's both warm and weird, and it paints an attractive picture of what their relationship may have been like. It's definitely worth seeing if you're a big fan of either character.

Sam & Dede, or My Dinner with André the Giant is by Gino Dilorio. Directed by Leah S. Abrams. Set Design is by Erik Ladue. Set Design Adaptation is by Tara Higgins. Lighting Design is by Maxx Kurzunski. Sound Design is by Ryan Lee Short. Costume Design is by Brooke Jennings. Prop Design is by  Florence McCafferty. Fight Choreography is by Jon Bailey. Stage Manager is Beth Hall.

The cast is Dave Sikula and Brendan Averett.