Written and Performed by Nessa Norich, Kyra SIms and Alex Vlahov;
Directed and Conceived by Alex Vlahov
Produced by The New York Neo-Futurists 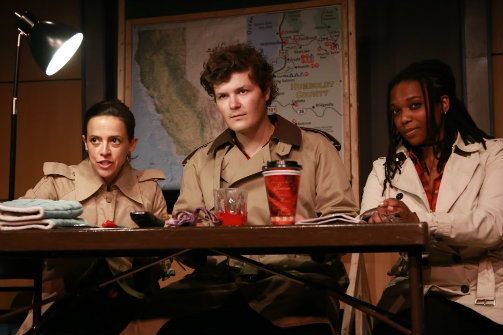 BOTTOM LINE: In the investigation of a real-life cold-blooded murder, the New York Neo-Futurists uncover the blurry line between fact and fiction.

On the first day of 2014, Father Eric Freed was murdered in Eureka, California. A beloved pastor, Japanophile, and high school teacher to A Simple Art director and co-creator Alex Vlahov, Freed’s brutal and unjust death continues to haunt his community. Through use of countless devices—from real transcripts of interviews, to song and dance, schtick and repetition—New York Neo-Futurists Alex Vlahov, Nessa Norch, and Kyra Sims embark on a show-and-tell of epic proportions.

Though their goal is to tell us the story of this murder, the cast is not after justice. Unlike certain characters from the interviews Vlahov conducted, they’re not looking for who to blame (the murderer? the police department? God?) Instead, the cast holds our hand through metaphysical questions about how to embrace the inherent mystery of life and, therefore, death. They urge us to deviate past an “eureka”-driven path into a sometimes absurd, sometimes calmingly practical journey: “Take the facts of your life and use them to tell the story of you.”

The premise and title of the play are based on Raymond Chandler’s 1944 essay The Simple Art of Murder, which argues that true crime can seldom be fact-based, that the gap between fact and fiction is uncrossable. Chandler takes it even further: “If the mystery novel is at all realistic (which it very seldom is) it is written in a certain spirit of detachment; otherwise nobody but a psychopath would want to write it or read it.” By using touching personal stories and anecdotes, Sims, Norch and Vlahov disprove Chandler’s theory.

An unexpected commonality of the true crime stories we’ve binged in the last few years—the Serial and S-Town podcasts, The Jinx, Making a Murderer—has been the role of the narrator. No matter the characters, the person doing the investigating seems to be intricately linked to the story itself. Serial's Sarah Koenig repeatedly questions her own failed detachment from the subject of her investigation: “What if [Adnan Syed] is this amazing sociopath and I’m just being played?”, she asks towards the end of the series. In a way, the murder and its unanswered questions isn’t the most interesting part of A Simple Life, either.

Luckily for us, these artists are not journalists struggling to maintain their integrity and therefore their subjectivity; making theater gives them freedom to trail off. Sims and Norich are often asked by Vlahov to find the connections between their own lives and this murder. They not only follow Vlahov on his quirky detours, but take charge in creating original motifs that serve the “why” we’re trying to answer. Sims’ relationship to her French horn throughout the play immediately comes to mind, along with Norich’s esoteric nature and biting humor. When these moments stopped happening for too long, I missed them and craved more.

Watching the show, I found myself wondering whether Vlahov knows that much of the action of this play is contained in his infectious earnestness and seriousness. The audience is a cat and Vlahov acts as a full-blown laser show. It’s a lot to take in, but it’s fun and captivating. I was waiting for Vlahov to reveal a little more on why this story has been such an obsession for him—this is, after all, the second telling of this murder by Vlahov. (It was originally produced in a one-man version at The Tank).

As in any Neo show, audience members shouldn’t expect the safety of a fourth wall and a clear cut Aristotelian narrative. Instead, this is a piece where Neos do what Neos do best: keep you alert with their thought and movement deviations; effortlessly incorporate intersecting perspectives; make you cry, think and laugh all with the same thought; and always leave you wanting more. There are no accidents on this stage. This is clearly a studied piece, the fruit of labor, but it can get confusing. Embrace it.

The trio has created a giant and intricate net, threaded with haikus, atomic bombs, the state of California, the New Testament, toast and coffee, a wooden stake, New Year’s Eve, and Japanese cooking. In performance, the three actors takes this net and go out fishing in the high waters for clues and answers. Just like in any risky outing at sea, sometimes the net gets tangled and worn down, causing a few holes here and there. But I trust this ensemble to patch it up for me as I sit, stirred by the waves, waiting for the next haul.