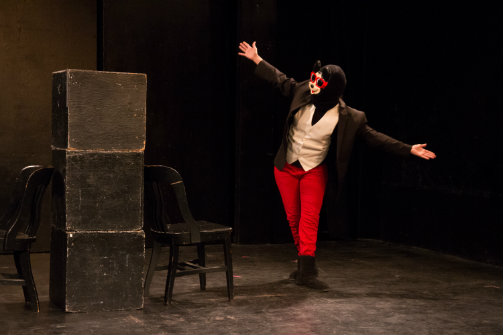 Mónica Quintero in The Refugee Plays. Photo by Jody Christopherson.

In The Refugee Plays, five playwrights grapple with the refugee/immigrant experience in the United States in short scenarios featuring unique perspectives. First, Mickey’s Confession by Carlos Castro describes the life of an acting student-turned-Times Square character (Mónica Quintero) in a whimsical monologue. Second, A Different Place by Penny Jackson is a bit closer to the expected refugee narrative: a conservative and a liberal (Max Monnig and Jose Leon) fight over how to cope with the refugee crisis…and, specifically, how to deal with the refugee who has stumbled into their bar and cannot speak English (Niall Ray). Even with the typical political narrative, Jackson’s play does grapple with an interesting and troubling phenomenon: eventually, even those who were once considered “safe” from discrimination will find the tables turning on them when racially-motivated hatred is socially permitted.

The third play, We Only Want What’s Best for Everyone by Sean E. Cunningham, carries some key tropes from farce and comedies of manners, but the scenario does not deviate too far from naturalism: a couple (Matt Walker and Kate Herman) entertain their friends (Russell Erik Kohlmann and Krystal S. Ballard) over wine while bragging about how they’re underpaying their undocumented maid (Idalia Limón). Meanwhile, the maid looms in the background, hearing all while cleaning up the couple’s mess.

Hyena by Callie Kimball was, stylistically, the most non-naturalistic of all the plays, and also the play that offered the most underrepresented narrative. A young girl (Vongai Shava), presumably from an African nation, and a white American civil servant (Kate Herman) meet, and the latter helps the former prepare her case for some kind of civil processing. No specifics are shared, but it appears the girl is a victim of some kind of assault (Rape? Genital mutilation? Something else?), and her memory of her mother (Kyla Sylvers) shames her for not only being “broken” and “empty,” but for even considering allowing a white woman to help her.

It is inherently challenging in the 10-minute play format to get one’s point across quickly and clearly without sacrificing depth and style, especially when the plays in question have a very specific social commentary to deliver. That said, Morning After by Charles Gershman was the most successful in providing nuance to what could easily have been another didactic theater piece. A somewhat-privileged gay millennial (Michael Witkes) wakes up next to a Syrian refugee (Andres Robledo), having forgotten that he drunkenly promised the refugee a place to live the previous night, before sleeping with him. The relationship between the two unlikely lovers, and the circumstances of their meeting, presents a larger allegory illuminating the United States’ attitude towards the Syrian crisis. While the characters and their unusual situation made the play engaging and entertaining, the larger metaphors inspire us to think about U.S.-Syrian relations from a different angle.

In a production with limited design opportunities, Emma Wilk’s sound design becomes a vital instrument for conveying the colors of each scene. Her nuanced sensitivity towards the arc of each scene’s dialogue, and towards each play’s balance between reality and fantasy, really have a chance to shine here. Valerie Insardi’s lighting design works in harmony with the sound. And all three directors—Dan Dinero (Theasy's Editor in Chief), Rachel Dart, and Logan Reed—weave the stylistically diverse evening together with transitions involving previously-introduced characters. These transitions also present us with more images depicting the anxiety of a refugee’s life in America: customs check-ins, feeling like one needs to hide, and protesting, for example. The Refugee Plays feature important issues facing immigrants and particularly political refugees in our nation. It is refreshing to see these kinds of topics grappled with onstage, especially in a festival setting.