Written and Performed by Hamza Zaman
Produced by The One Festival 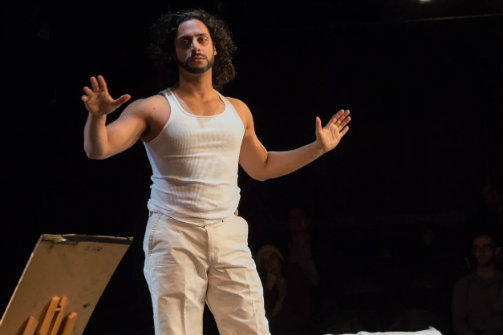 Lights come up and the audience members become prisoners. Hamza Zaman’s solo show Redemption starts off with an unnamed inmate (Zaman) letting us know, through his gaze, what we’re in for inside the concrete walls that have holed him up for years. Putrid meals, pleasure from pornographic magazines, shanks, and the loss of relationships only skim the surface of what we will encounter. He’s lived through it all. Yet this inmate yearns for a place in the world, both inside and out, even if he doesn’t have the resources to do so easily.

Zaman plays his inmate with a macho roughness sprinkled with pseudo tough chuckles that proves to be a veil to get by. The familiar punches life throws have made him into steel that is easy to smith. Muffled screams of a fellow inmate being raped and suicidal thoughts (the epitome of punches) then guide him, ironically, towards where he wants to be. As the play progresses, the stiff and frantic pacing he started off with slows down to reveal a softer demeanor; a cleaner slate for a new man even if he doesn’t have the deepest of psyches.

Even if it shines a vague spotlight on a faulty justice system, Redemption is a prison narrative that falls short in places it should explore more inquisitively, an exploration that might allow it to inspire more than it actually does. The portrait Zaman paints for us, as true as it may be for a majority of inmates, privileges stereotypical jailhouse woes over a contemporary portrayal of harrowing incarceration conditions. Descriptions of sub-par toothbrushes and laughable workout routines set to Duran Duran hold stage time where minority despairs and post-prison economical worries might be more effective.

But Zaman means well. There’s a fine line of hope between his character’s prison cot and the easel where he will start his road to rehabilitation, a hope I’m pretty sure not many prisoners find. The minimalistic stage design and majorly blue lighting accentuate the inmate’s loneliness and search for hope. Certainly it’s a heartwarming path, but one Zaman can squeeze more out of in order for us to reach a more cathartic resolution.

We, as an audience, never get to leave the prison alongside Zaman’s character. We’re left behind to ponder what’s going to deliver the shred of hope that’ll redeem our very own hardships. After a show filled with familiar prison tropes, this might be its best achievement.

Redemption is written and performed by Hamza Zaman. Lighting Design is by Omayra Garriga.