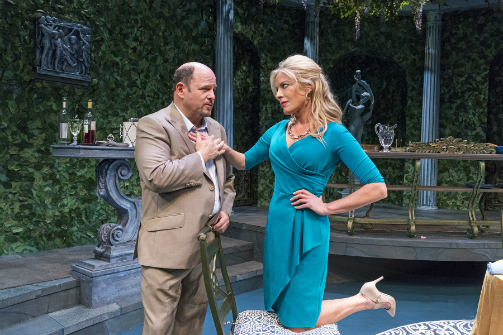 Sitting in the Manhattan Theatre Club's audience Saturday's evening, I was nervous with excitement knowing that I would see Jason Alexander walk onto the stage of the fairly intimate theatre on 55th Street. Yes, I am a Seinfeld fan, but that is not how Alexander originally won me over. I remember watching him as Albert Peterson in the 1995 made-for-TV version of the hit musical Bye Bye Birdie. To this day it is him I think of as Albert, rather than his predecessor from the 1963 movie, Dick Van Dyke. Despite my love of this performer, I made a point of stepping back and observing from the perspective of someone who is not starstruck by a childhood love. Consequently, I was able to watch The Portuguese Kid, featuring Alexander, Sherie Rene Scott, Pico Alexander, Aimee Carrero, and Mary Testa, with fresh eyes to appreciate the lot of them as a skilled cast of professionals.

Atalanta Lagana (Scott) is a recent widow, for the second time. However, she doesn't seem too sad as she discusses her late husband's estate. The whole interaction seems quite matter-of-fact as she seeks advice from her long term lawyer and friend, Barry Dragonetti (Alexander). Things get heated as Atalanta admits to Barry that she has been yelling his name in bed while with other men for the past twenty-five years. Attempting to not mix personal and business relationships, he calls in his assistant, a.k.a. his mother, Mrs. Dragonetti (Testa) to get Atalanta's coat so she will leave. A cat fight breaks out (Alexander's characters always seem to have loud, overbearing mothers), including such vicious taunts as "Little bitches have big ears” and “Take your discount, bullshit coat." To complicate things further, Atalanta's new boyfriend Freddie (Pico Alexander) is the ex-boyfriend of Barry's young, sexy wife Patty (Aimee Carrero), and everyone gets their panties in a twist as full out pandemonium ensues.

Writer John Patrick Shanley (Moonstruck, Doubt) gives us many things with this play: the expected laughter, some political Trump vs. Clinton references, and his own skilled direction. At any moment you could freeze the actors and see a full story based on their positioning. Along with those positives, the banter between the actors really sets the show apart from other comedies. Comedic timing is not easily taught, but each performer brings his or her unique brand to the table as they make snide comments, berate those around them, and curse each other out.

As with most things, there are always further areas of opportunity. In this case, the plot is extremely predictable. I was able to easily guess everything that happened in the story, but it doesn't take away from the humor. There's a reason comedic formulas exist. People know what works. For instance, there is a scene with sausages, where all but one of the characters are having a hilarious reaction to the sausage being entirely too spicy. Though this idea is hardly original, Shanley's premise, combined with quality performances, sells the idea. Venturing beyond the funny is when I think the play falters. Grandiose ideas and philosophical musings are introduced into the story and seem like strained attempts to add substance to the show. I appreciate the effort to give people deeper meaning, but these serious subjects tend to make the action a little disjointed as these life introspections are not up to par with the rest of the production.

The same way I am still still imagining Jason Alexander singing and dancing through Bye Bye Birdie's “Put on a Happy Face,” I am positive I will imagine him in The Portuguese Kid's erection scene for years to come. Even John Lee Beatty's rotating stage design is a victory for this production. It creates a joyful merry-go-round feel as Mary Testa dances into the wings, accompanied by Obadiah Eves' original music. I would also like to personally thank everyone involved with this show as, after seeing about fifty shows with him over the past five years, I finally saw my husband laughing and engaged beside me.

(The Portuguese Kid plays at Manhattan Theatre Club's New York City Center Stage I, 131 West 55th Street, through December 3, 2017. The running time is 1 hour 40 minutes with no intermission. Performances are Tuesdays and Wednesdays at 7, Thursdays and Fridays at 8, Saturdays at 2 and 8, and Sundays at 2. Tickets are $95 - $112.50 and are available at nycitycenter.org or by calling 212-581-1212. For more information visit manhattantheatreclub.com.)

The Portuguese Kid is written and directed by John Patrick Shanley. Scenic Design is by John Lee Beatty. Costume Design is by William Ivey Long. Lighting Design is by Peter Kaczorowski. Original Music and Sound Design is by Obadiah Eaves. Stage Manager is james Fitzsimmons.