Puffs, or: Seven Increasingly Eventful Years at a Certain School of Magic and Magic 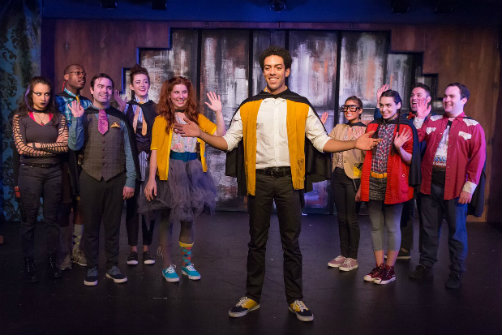 BOTTOM LINE: Puffs is Harry Potter for anyone who has ever felt like they’re a secondary character in someone else’s story.

As any fan of Harry Potter knows, the series revolves around a young orphan who is plucked from his humdrum, decidedly non-magical life and sent off to a school for magic, where he becomes best friends with two other young kids. Throughout their seven years at the school, the trio is drawn closer together, both through interactions with the teachers and students who don’t understand them (or are out to kill them), and through a series of exciting adventures that get increasingly darker. Skills are learned, strange things are seen, lives are lost. And Puffs is totally that same story. Well, except this orphan’s name is Wayne Hopkins. Hi Wayne!

Rather than being sorted into the Braves, or the Smarts, or the Snakes, Wayne (Zac Moon) gets assigned to the Puffs, those students who tend to go unnoticed when they aren’t being actively disliked. Even though Wayne’s a bit of a sci-fi geek, this doesn’t prevent him from making a few close friends, including the studious Oliver (Langston Belton) and too-goth-for-school Megan (Julie Ann Earls). At first, Wayne and his crew are bummed at being lumped in with “The Mighty Ducks of Wizards,” they soon learn there are some advantages to being a Puff—everyone is really nice, Herbology is easy, and you’re close to the kitchen. And there’s also Cedric Diggory (the delightfully suave James Fouhey)—who, if a bit dim, is super cool (for a Puff, at least) and even a bit dreamy.

If it isn’t obvious by now, Puffs is set during the same seven years as the Harry Potter series. But when told from the perspective of Wayne and the (Huffle)Puffs, some of the canonical events become quite different—you certainly won’t view the second challenge of the Triwizard Tournament in quite the same way. Matt Cox’s incredibly clever script contains plenty of jokes about the novels, the films, and the broader Harry Potter universe; there’s a reference to The Cursed Child, and another about the newfound hotness of adult Matthew Louis (who played awkward Neville Longbottom in the films). The jokes come fast, and will likely be understood best by those steeped in Harry Potter lore. But if your Potter-obsessed daughter/brother/wife/owl is dragging you along, there is no need to cram, since even the most unenlightened Muggle will find much to enjoy.

In order to get through seven years in “90-ish” (closer to 100) minutes, the action must move quickly, and thanks to Kristin McCarthy Parker’s seamless direction, it does. But Puffs is more than just non-stop crazy action with a bunch of jokes for Potter fans. Cox and Parker understand that sometimes comedy, especially physical comedy, takes time, and they make smart choices about when to speed through the story, and when to slow down and build a joke for a better pay-off. The action is never muddy or confusing, due in part to the helpful narration by the appropriately accented A.J. Ditty.

All your favorite characters are here, played by the extraordinarily talented and amazingly energetic ensemble: along with Fouhey (who takes on a hilariously low-tech “Mister Voldy” after the events of Year 4), there is Madeleine Bundy, Jessie Cannizzaro, Nick Carrillo, Andy Miller, Eleanor Philips, and Stephen Stout. Stout’s Professor Snape is perhaps one of the most deliciously demented impersonations of the actors from the films I’ve ever seen, and I certainly won’t spoil how Bundy hilariously covers Potter and his two friends. There are also some new characters, including Leanne, who in Andy Miller’s expert hands is both delightfully deranged and incredibly endearing.

Puffs wisely avoids special effects or high-tech gadgetry—the show begins with an overhead projector!—and instead uses inventive movement and plenty of (theatrical) magic. Many of the ideas are all the more enjoyable for their simplicity—I’m still laughing at how the ghosts are staged. A more modest version of Puffs ran at the People’s Improv Theater about a year ago—see Theasy’s review here. While I didn’t see that production, this new one seems to be expanded a bit—the running time is a bit longer and the design elements more fleshed out. Most notable are Madeleine Bundy’s perfect costumes, which expertly walk the line between rag-tag theatre group and professional production. Also outstanding is Cox’s sound design; thanks to the stage management team led by Jo Goforth, the cues are incredibly tight.

Sure, the final battle is a bit long, but the subsequent epilogue is one last lovely parallel to Rowling’s novels. And best of all, Puffs never loses its sincere Puff-y spirit. Pop culture parodies often skew towards a sardonic, anything-for-a-joke mentality. But Puffs, like its heroes, has heart and a healthy dose of optimism, much needed nowadays. Puffs knows that most of us won’t save or even radically change the world—we’re far too imperfect and forgettable. But sometimes, especially in a world overtaken by ignorance, venality, and evil, just doing something is an achievement worthy of celebration.