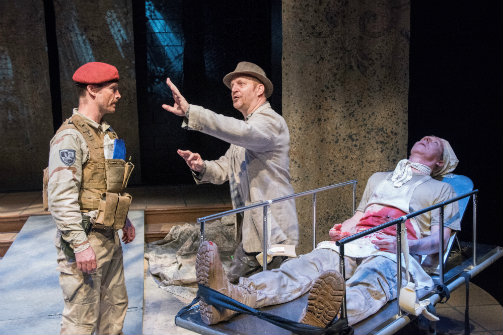 BOTTOM LINE: Blending elements and ideas from across different periods, Pity in History offers an energizing take on a deeply human conflict.

“I carved a hand and imagined its destruction...And now the hand is destroyed...It’s no preparation.”

So laments the artist Gaukroger (Steven Dykes)—no matter how dearly one cares for their work, their loved ones, or their life at large, things fade. There is something very potent in these words when hearing them through the lens of a period piece, as the people who actually experienced the story’s tumult have long since passed. There likely never was a Gaukroger, but there certainly was a man carving headstones at the outbreak of the English Civil War, a man whose life was transformed by the ebbs and flows of religious mobs. His wife, his friends, his children, his work, the many moments of his life, have all disappeared from the earth. This reminder of how precious, and how even more fleeting, life is, is just one of the many themes touched on in Howard Barker’s Pity in History.

The term "period piece" isn't quite accurate, exactly—Pity in History encompasses much more than that term suggests. Originally written as a teleplay for the BBC, it aired for the first time in 1985, yet the story’s inspiration is nestled in the English Civil War, around 1640. The language is modern, but more lyric than natural. In the original telecast the design was period, but in Potomac Theatre Project’s staging (which is the first live performance of the play) the time is the present, and the elements are a mix of perfectly modern to more traditional, making for a theatrical world that reflects Barker’s stylized language. Soldiers often carry automatic rifles wearing contemporary fatigues, while at other times they swing around eight-foot lances. The piece is a “history play” in the same sense as any of Shakespeare’s “histories” are; it’s much more grounded in Barker’s point of view and language than in any particular historical context.

This show is a perfect fit for those looking for a more cerebral night at the theater. Though Richard Romagnoli’s direction does a great job of infusing this piece with a dose of chaotic energy, we aren’t watching Wrestlemania, nor is this a typical wartime drama where we might see a young soldier make his way through the ranks. Our hero is the artist, and as such we take a bird's eye view of the mechanisms feeding the violence. It’s a scary place to be, not because we’re afraid of any particular outcome, but because we see that any outcome would be a zero-sum gain.

On top of that, the stylized world ensures that we’re not only dealing with a specific war, but the concept of war in general. We’re not simply discussing idolatry and wealth as sins, but all forms of righteous thinking. It’s an ambitious play with a sweeping scope, and it makes no attempt at subtlety. The artist cares about what is real. The soldiers care about what is right. The chaplain cares about what is good. Everyone makes a decent argument at times, although our allegiances ultimately lie with the artist’s objectivity.

The cast does a nice job bringing immediacy to some very heady material. It’s easy to imagine getting lost in Barker’s poetry and rhetoric, but each actor's performance offers a necessary human quality that keeps the heart of the story beating. Particular standouts are Steven Dykes as Gaukroger, and Jonathan Tindle as Murgatroyd, a touching sub-hero who sits throughout the show in manic disbelief of his impending doom. As an added challenge, the cast performs in accent. Though occasionally these can make lines more difficult to understand, it’s a necessary cost to maintain the author’s intent.

One testament to the cast’s performance is the understanding that each character is grounded to a very nebulous space. Given how many historical periods intermingled in this show, the characters' values and statuses need to be communicated through performance, not context. For all its virtues, Pity in History in its utter bleakness and abstraction makes sorting the important actions from the trivial ones a challenge. The stakes are open to interpretation, making it the company’s job to communicate them. At times the storyline takes second chair to a conceptual view of humanity that Barker seems rightly enamored with. However, this results in some slow moments that lessen the narrative's overall impact.

Pity in History sweeps through the stage and seems to exit as swiftly as it entered. It offers something touching and sad that is then taken away, much like Gaukroger’s carved hand, to live on in memory. There’s perhaps no way to conceive of how quickly life actually flashes, no preparation to see the absence in presence, but Barker’s play takes a crack at the lofty subject. He offers us a historical lens to view the present, and a present view of a time long past, so that the two are indistinguishable in a way that seems inarguably true. In spite of its ambitious scope, there is a lot of power in this compact play.

Pity in History is by Howard Barker. Directed by Richard Romagnoli. Set Design is by Mark Evancho. Lighting Design is by Hallie Zieselman. Sound Design is by Cormac Bluestone.  Costume Design is by Danielle Nieves Stage Manager is Devin Wein.