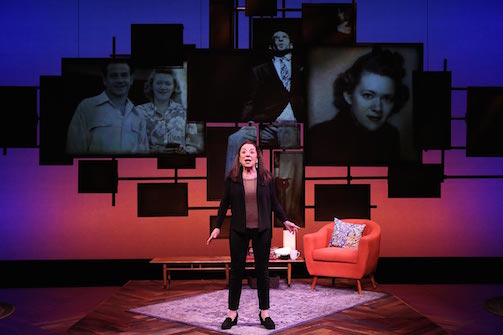 Monica Piper in Not That Jewish. Photo by Carol Rosegg.

BOTTOM LINE: Through a series of schtick-filled parlor stories, Monica Piper exemplifies with great heart what it really means to be Jew"ish."

Monica Piper grew up as a Jewish girl in the Bronx knowing no Hebrew and belonging to no temple. Her family always knew, though, that being Jewish was something that's in your heart. But even more dominant in their hearts was a love of comedy. They would dress up and stand on the doorstep, tossing out small talk like "excellent service today," creating the facade of having just gone to temple. The family performed in greater acts than simple doorstep tableaus, though. Piper's father, Roy Davis (born David Poss), was a variety show hit as a "vocal pantomimer" and played packed houses nationwide, showing off his chops. When Piper was born, as she explains in the show, her father always told her, "kid, you're funny," and with his blessing, she knew she was destined to be exactly that.

As Piper sits in her faux living room onstage, she tells her life story of how Jew"ish" May Lee Davis became award-winning artist Monica Piper, and despite changing her name, found her true self along the way. From divorce to The Comedy Store, the loss of a parent to the adoption of her son, winning an Emmy to her breast cancer recovery, Piper delivers an intimate performance within the large proscenium at New World Stages. Through all the teary moments in the audience, Piper manages to bring a smile back with one of her jokes and expert physical comedy. In some moments, it is easy to eagerly await the next punchline, like watching a standup comic's routine, while in others, Piper captures true theatre and creates a tangible stillness in the crowd as she, herself, struggles to find the right words. Thematically, Piper returns again and again to the notion that humor is essential to being Jewish: "we have a way of making dark times okay," she says. Not That Jewish shows that so long as you have compassion, strength, and the ability to add "sh" to the beginning of a word, then you're Jewish enough. But don't worry—the program comes complete with Piper's own "Yiddish 101" pamphlet.