By Ken Urban; Directed by Benjamin Kamine
Produced by The Amoralists 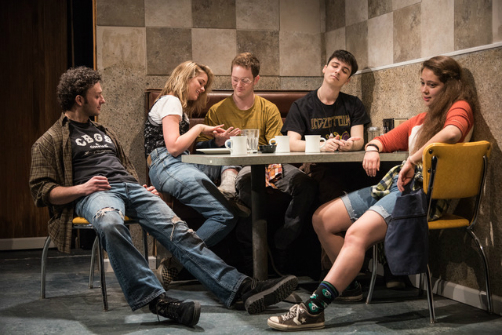 BOTTOM LINE: A play about friendship, sex, growing up, and aliens.

The summer of 1992 would be the last one shared by five teens living in Medford, New Jersey, before all of them—well, most of them—went off to different colleges in the fall. In Ken Urban's Nibbler, one friend remembers the events years later, as well as the supernatural entity that turned their world upside down. The murky, unsettling transition into adulthood would have been difficult enough without something crash-landing outside town and transforming his friends one by one into...something else.

It's a great story, sure to strike a chord with anyone who has ever been told to do something meaningful with their life, yet has been given little to no instruction on how to do this. The writing is honest, clever, and totally shameless. To say it covers some sensitive subjects would be an understatement. From surprisingly relevant politics to graphic-yet-tasteful masturbation, there are truly no cards this play leaves on the table. Every scene has a relentless rhythm that is brought to life with rigor and focus by director Benjamin Kamine. There's a familiar candor to the conversations of the "high school gang," and the scenes where they all hang out in the diner really encapsulate the super tight high-school bubble before it pops.

The whole cast gives incredible performances. They take the writing and run with it in a way that is both brutally sincere yet also kind of wacky and over the top. They remain larger than life and somehow completely human at the same time. I felt like I knew the characters and wanted to see more of them. I also appreciate that, despite scenes taking place before, during, and after sex (and there are a few of them), the the nudity never becomes the main event. It's just part of the action, and there is usually something more important happening. That said, there is a lot of pretty graphic stuff here, so if you're not comfortable seeing certain things, you may want to steer clear.

There is a lot of great design in this show, and many memorable images. Anshuman Bhatia's set is elegant and economical, and works well with the projections and Lux Hanc's costumes to transport us back to a small New Jersey town in the 90s. The puppetry by Stefano Brancato is detailed and expressive, and it comes to life in a manner that is both disturbing and hilarious. The sound design by Christian Frederickson and Christina Watanabe's lighting combine to create sci-fi horror scenes and angtsy existential breakdowns, with classic diner tunes playing in the background just loud enough for you to know they're there.

NIbbler's treatment of a fundamental feeling of confusion and dread—the fear of the change you don't expect, and also the fear of the change you see coming—is something anyone can appreciate. The whole thing is a little campy and nostalgic, but the ideas are timeless, and even the dated references have painfully clear modern connotations. It's funny, it's sweet, and it's constantly surprising. I left the theater totally astonished.