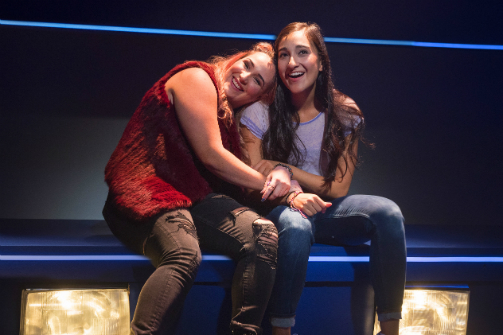 Emma Hunton and Krystina Alabado in The Mad Ones. Photo by Richard Termine.

The Mad Ones, the new musical written by Kait Kerrigan and Brian Lowdermilk, is a story of self-discovery. Samantha Brown (Krystina Alabado) has to choose: whether to follow a path that has been set before her, or blaze a new trail of her own. Go to college, or start driving and never stop? As she sits in the the driver's seat paralyzed with indecision, a familiar voice in her head asks, "left or right?" What ensues is a drag race down memory lane, as Sam follows her best friend and newfound spirit guide through all the highlights of the past year, hoping to find some truth that will help her decide what to do.

From moment one, what carries the show is the relationship between Sam and her best friend Kelly (Emma Hunton). Sam worries about the future, which usually makes her timid and fearful. Kelly is boisterous and impulsive, often pushing Sam outside of her comfort zone and trying to help her enjoy life. Somehow these opposites attract and the chemistry is quite effective.

The cast, which also includes Jay Armstrong Johnson (subbing in for Ben Frankhauser) as Sam's boyfriend Adam, and Leah Hocking as Sam's mother Beverly, works well together, and it's clear they all enjoy this piece. The characters come off as kind and sincere; even when they fight, they continue to root for each other, which helps us in the audience do the same. I always appreciate a story that creates tension without having a villain who is clearly in the wrong.

The main event is, of course, the score. Fans of this composing duo, commonly known as Kerrigan & Lowdermilk, will know what to expect: poetic lyrics, tight harmonies, and high-flying solos, all coming together to form their brand of joyful and energetic songwriting. Songs and scenes flow into one another effortlessly as the 100-minute story unfolds without skipping a beat. Occasionally a sort of "concert tone" takes over, and all this musical flair begins to detract from the story, but these moments are more due to the impressive vocal gymnastics than to any major flaw in the book. At several moments I found myself tapping my foot or nodding my head in rhythm, just enjoying the orchestrations and the voices on stage.

The show's visual aesthetic is elegant and economical, with Adam Rigg's set relying on one or two expressive pieces to create different locations. Similarly, Jessica Pabst's costumes communicate exactly who each character is using only one or two unique articles. This comes in handy when Emma Hunton starts transforming into various other characters. It all fits together quite seamlessly.

Overall, The Mad Ones is a fun show with great music and an honest message about being your own person. If you can look past all the teen angst—and there is a bit—I think everyone will be hard-pressed not to see a bit of themselves in Samantha Brown. If you like new musical theatre at all, or even just good music in general, don't miss The Mad Ones.