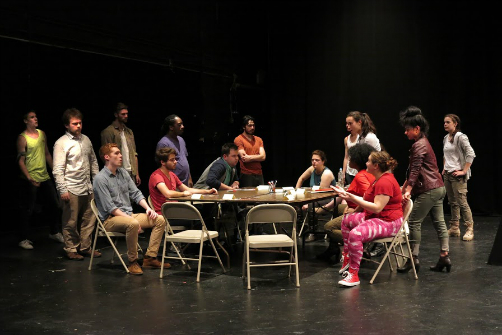 Mary V is the story of two versions of the same play: Shakespeare's Henry V, performed both by a traditional (male-dominated) cast, and by an all-female cast. The female cast gathers at the start in a phalanx, using direct address to inform the audience that their contracted, gender-reversed production of Henry V—titled Mary V—was cancelled by an Off Broadway theater at the last moment. One woman reads a letter from the artistic director, which explains that the board felt an all-male production would resonate better after Trump's election. (Trump's name isn't spoken but he immediately becomes the "why now?" of this feminist theatre piece.) The cast is livid, and shares that they have an ominous plan to regain control of the stage.

The male cast gathers and shoots the breeze in their rehearsal room, teasing the actress playing Katherine in their production (Lindsey White) who gamely plays along. The female cast members invade, claiming their right to the room. A tense standoff between the two casts comes to a head when would-be Henry (Carter Gaylord) makes an entrance worthy of John Cena, near-overwhelmed by shouts, music, and masculine table-thumping. With the players assembled, negotiations begin.

In other words, not a promising setup. Handled differently, this scene (and this play) might have turned into a swordfight, a victory, and the surrender of all men to the supremacy of women. Instead, Mary V is a bloody, complicated struggle for the soul of modern feminism.

In the first act, Mary (Rebekah Carrow) must bait Henry into fighting. The female cast members scream and shout to be taken seriously, and are by some—particularly the reasonable, peacemaking Montjoy (Liam Sweeney)—but only succeed in driving the male cast as a whole further from engaging them on an equal playing field. Mary plays dirty to draw out the anger and pain that can create a conflict the women can win, a familiar impulse in a world where powerful people can listen and nod to stories of oppression and fail to take action. In a sexually violent discussion in front of both casts, Mary responds to Henry's flattery by suggesting that the only way men find her attractive is when she asserts dominance, and offers to let Henry go down on her in front of the crowd, imagining he's a "pretty picture" on his knees—a phrase many will remember from our president's career in reality television.

This language isn't what we'd like to see from a feminist hero. Neither is her violent assault of the "prisoner" she captures in an initial skirmish with the men (a scene which, like all the violence in this piece, feels real and painful). Mary aims to fill the role of Henry V in all its masculine violence and oppression: one wonders, what becomes better in the world, or the theatre, if she wins? Is she any more worthy to be king? These are questions at the heart of Shakespeare's Henry V: the complications of power, and the right of a leader to use others' sacrifices for personal gain. These are the questions that drive wedges between feminist leaders as well.

Director Charlotte Murray uses Theatre for the New City's largest performance space extraordinarily well. The large ensemble fills the whole space, and engages the audience throughout. A seating arrangement change at intermission highlights the themes of the play, but I won't spoil it. The design elements are also impeccable in that environment (though I had mixed feelings about some sound effects created to add drama to the "close the wall up with our English dead" speech). The talent and total investment of the large cast, the thoughtful concept, and the excellent design all combine to create a piece of theatre that is enjoyable, critical, and essentially feminist.

(Mary V plays at Theater for the New City, 155 First Avenue, through June 18, 2017. The running time is 1 hour 50 minutes with an intermission. Performances are Thursdays through Saturdays at 8; and Sundays at 3. Tickets are $15 and are available at theaterforthenewcity.net or by calling 212-254-1109.)